The Best Little Holiday Cottage in The West!

Regular visitors to my Blog will know that we like to take our holidays on the Dingle Peninsula in the west of Ireland and that we usually camp wild away out by the beach. Well this year for various reasons we decided to look into renting a cottage for at least one of our two weeks and so back in May I trawled the internet for somewhere suitable.
We thought we'd maybe left it a bit late for booking especially as we were looking for something at the height of the season but we found a modest little place in the area we wanted and phoned up about it.
The lovely lady that we spoke to said yes we could book that place for the week we wanted but she also had a new cottage just finished, available for both the weeks that we'd be there. This was going to put us way over budget but we asked for the details anyway and as soon as we saw it we knew that it was the place for us.

The cottage is called An Sciobol, which means a barn, and sits right on the Slea Head Drive over looking Clogher Beach and Sybil Head. 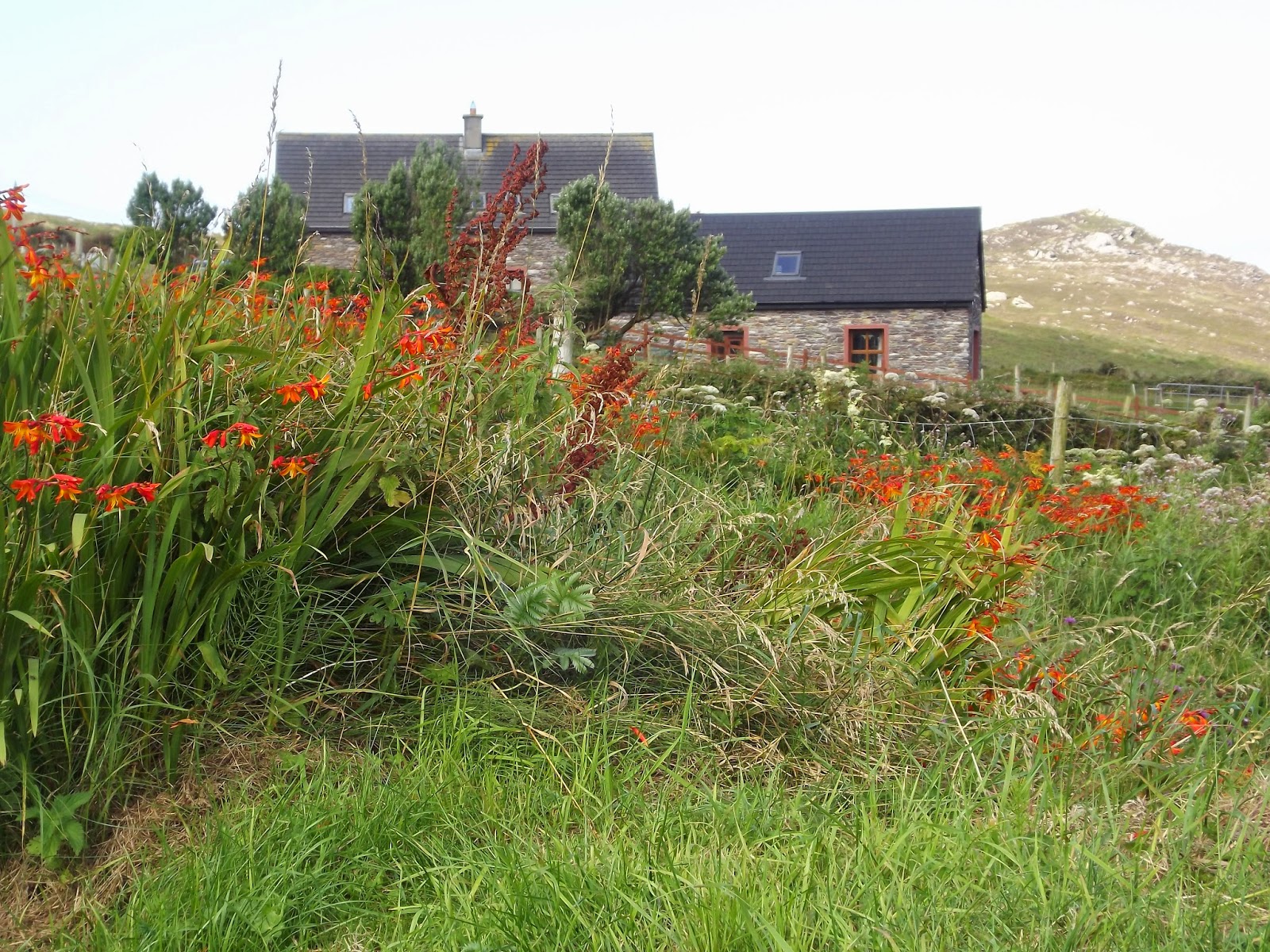 Although the house is brand new, it has a lovely cottage like, homely, welcoming feel. It's a happy little house and I found myself saying, 'Hello House' every time we returned from our days adventures. 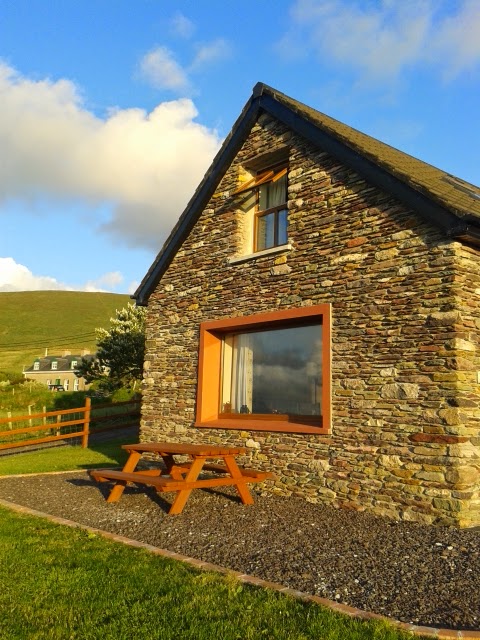 The downstairs is an open plan kitchen, living room, dining room with a bathroom and utility room and patio doors out to the garden. Upstairs were two double bedrooms and another shower room.
The kitchen was a dream to cook in as everything was new! I think I was the first person to use the grill! Everything had been thought of as well. Pots and pans, utensils etc and all really good quality, high spec stuff. I did not grudge cooking on holiday when I had this lovely space to do it in. 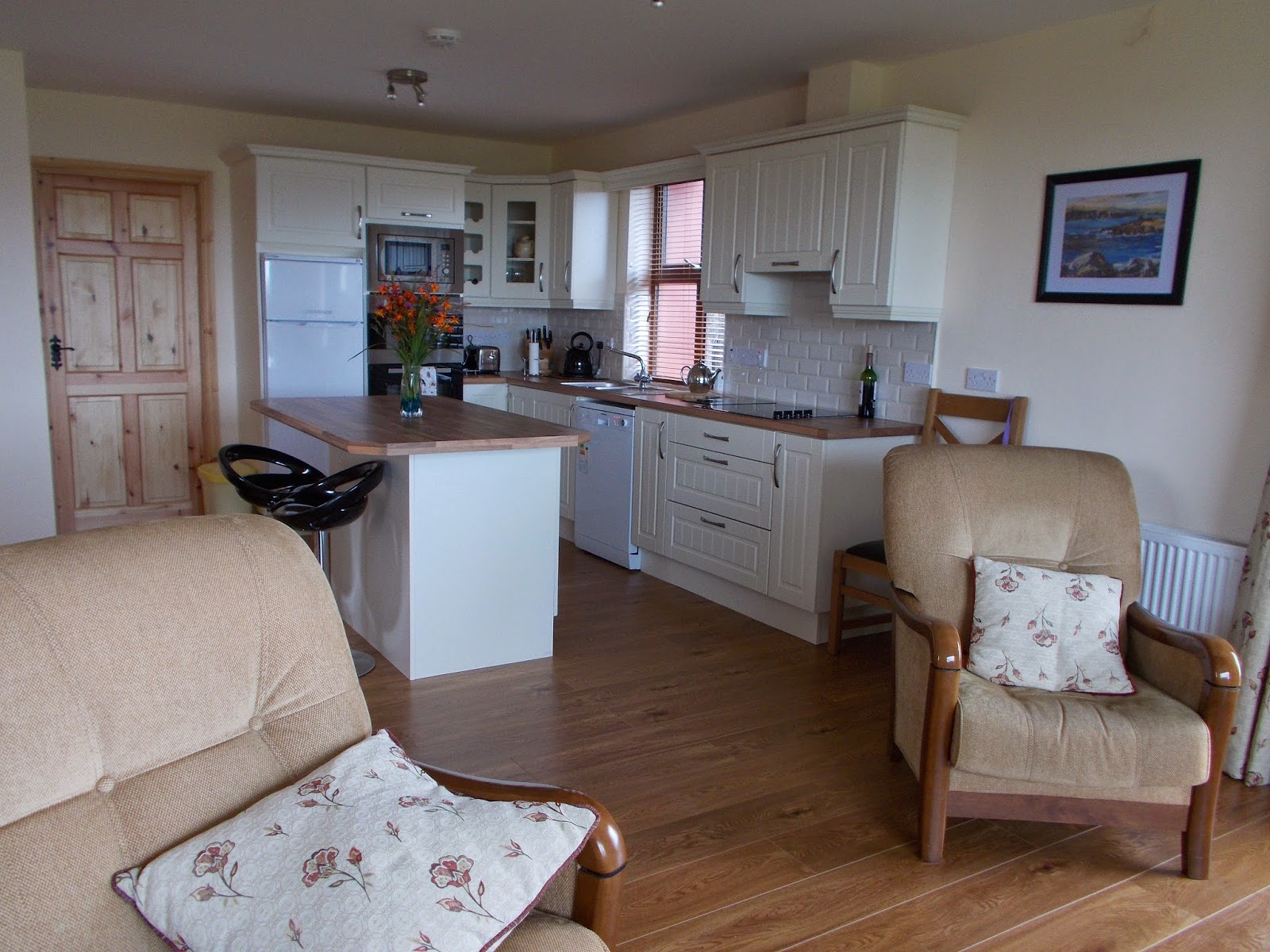 But what really sold this wee house to us was the view.
See that big picture window? 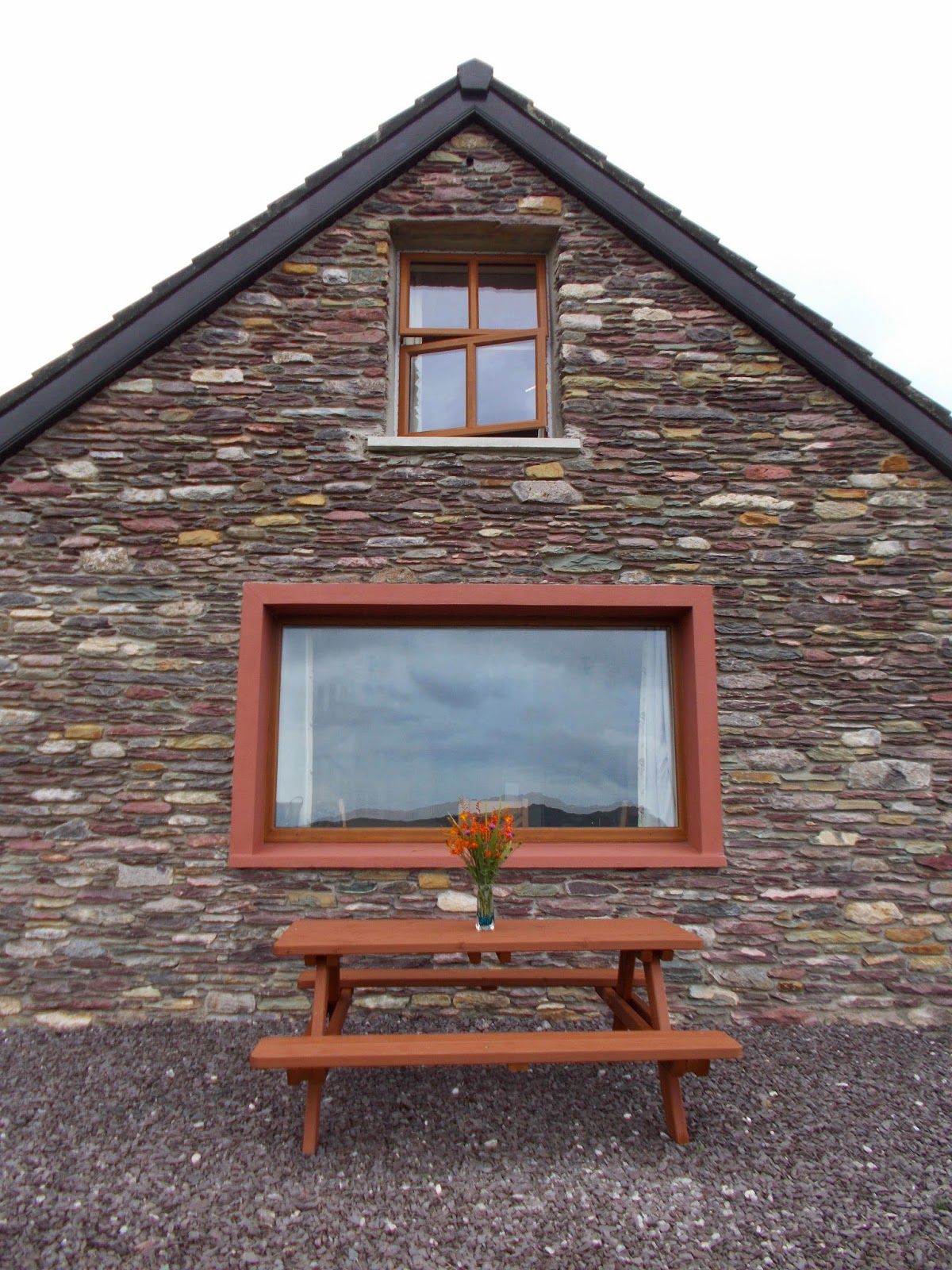 This is the view from inside! 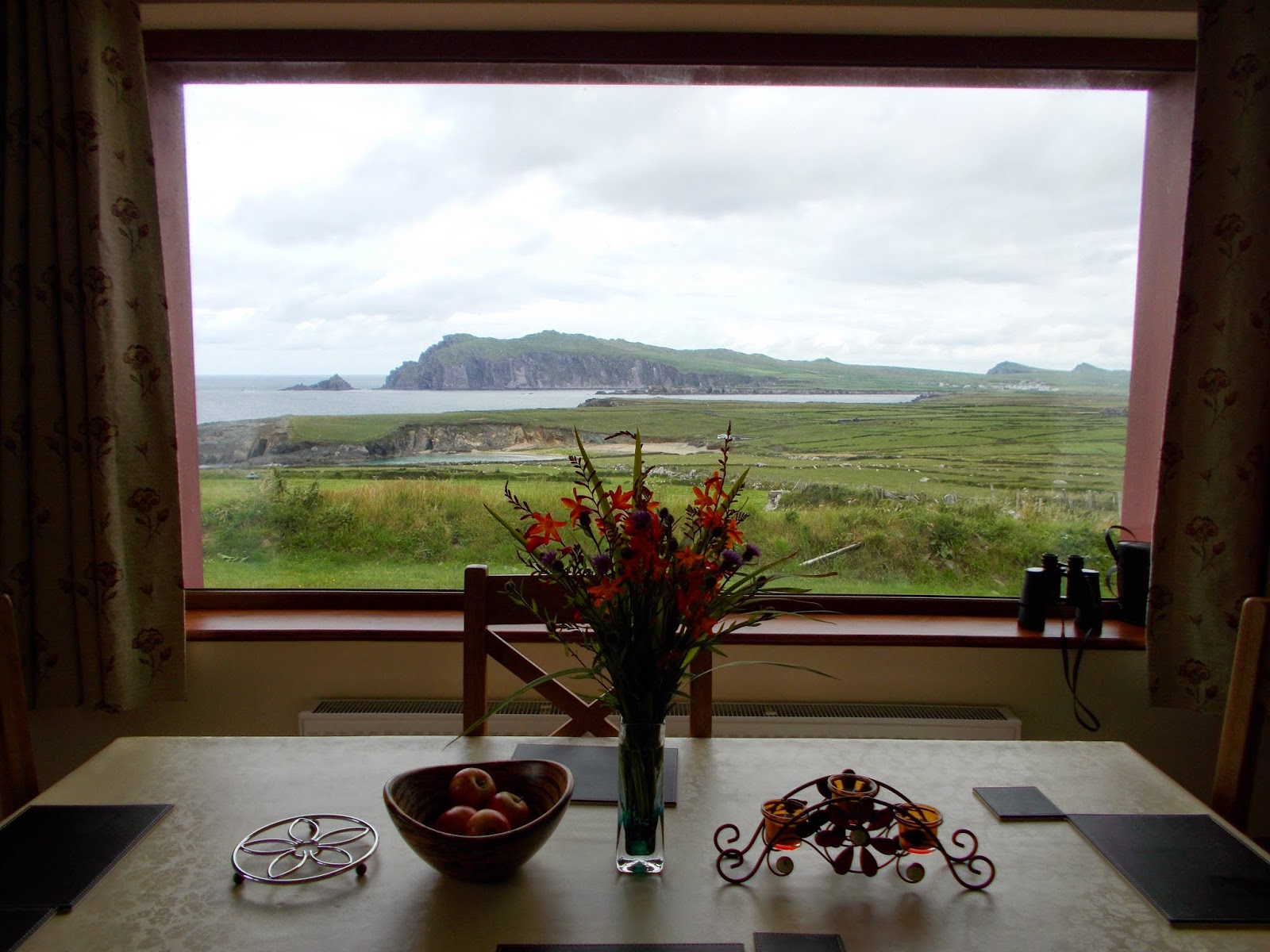 We'd seen a photo of the window and view before we booked but we had not appreciated how big the window was or just how far you can see and how impressive the view was. 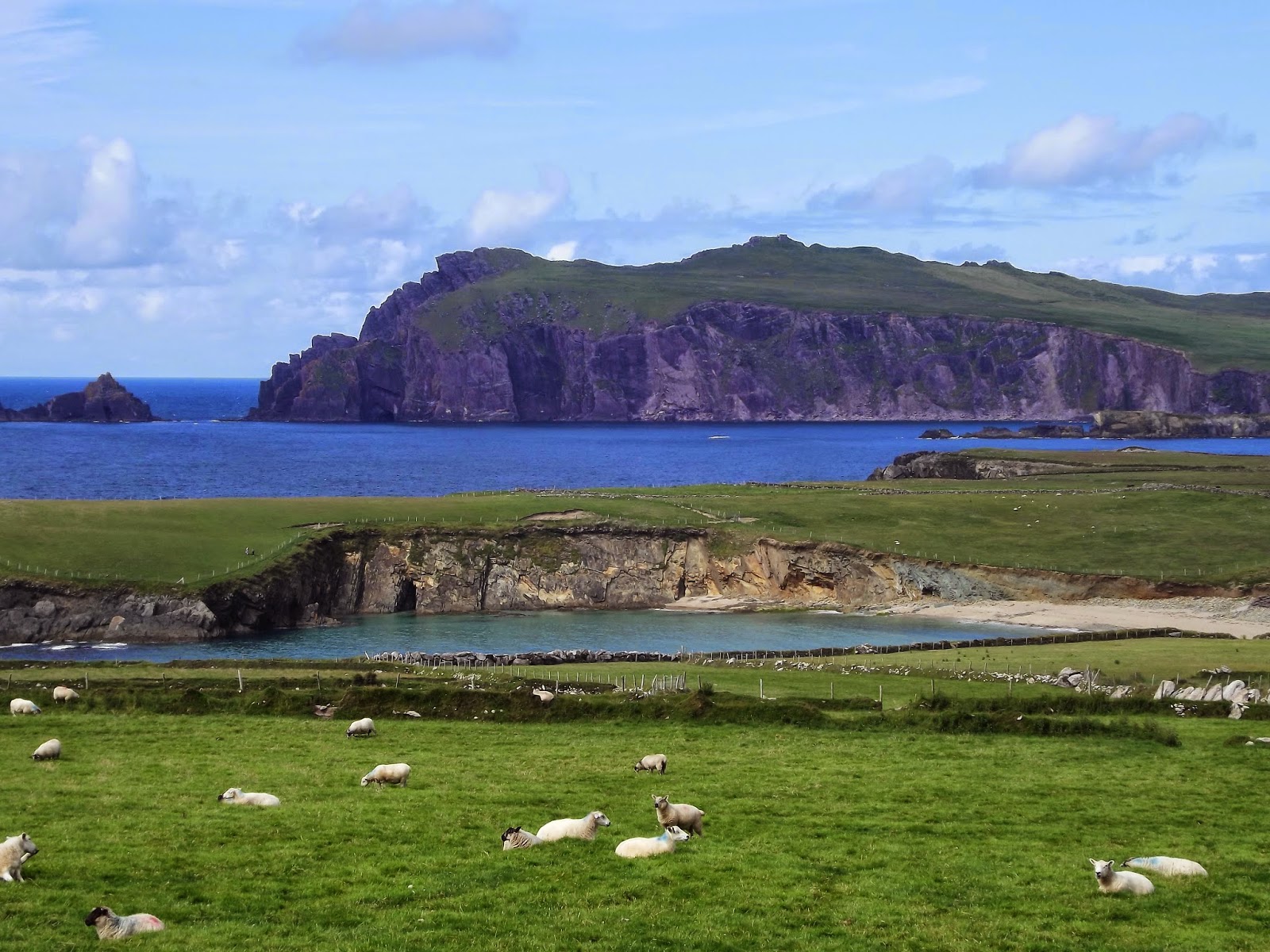 We were constantly gazing far and wide, grinning at just how wonderful it was and marvelling at how the scene looked different as the light changed throughout the day. 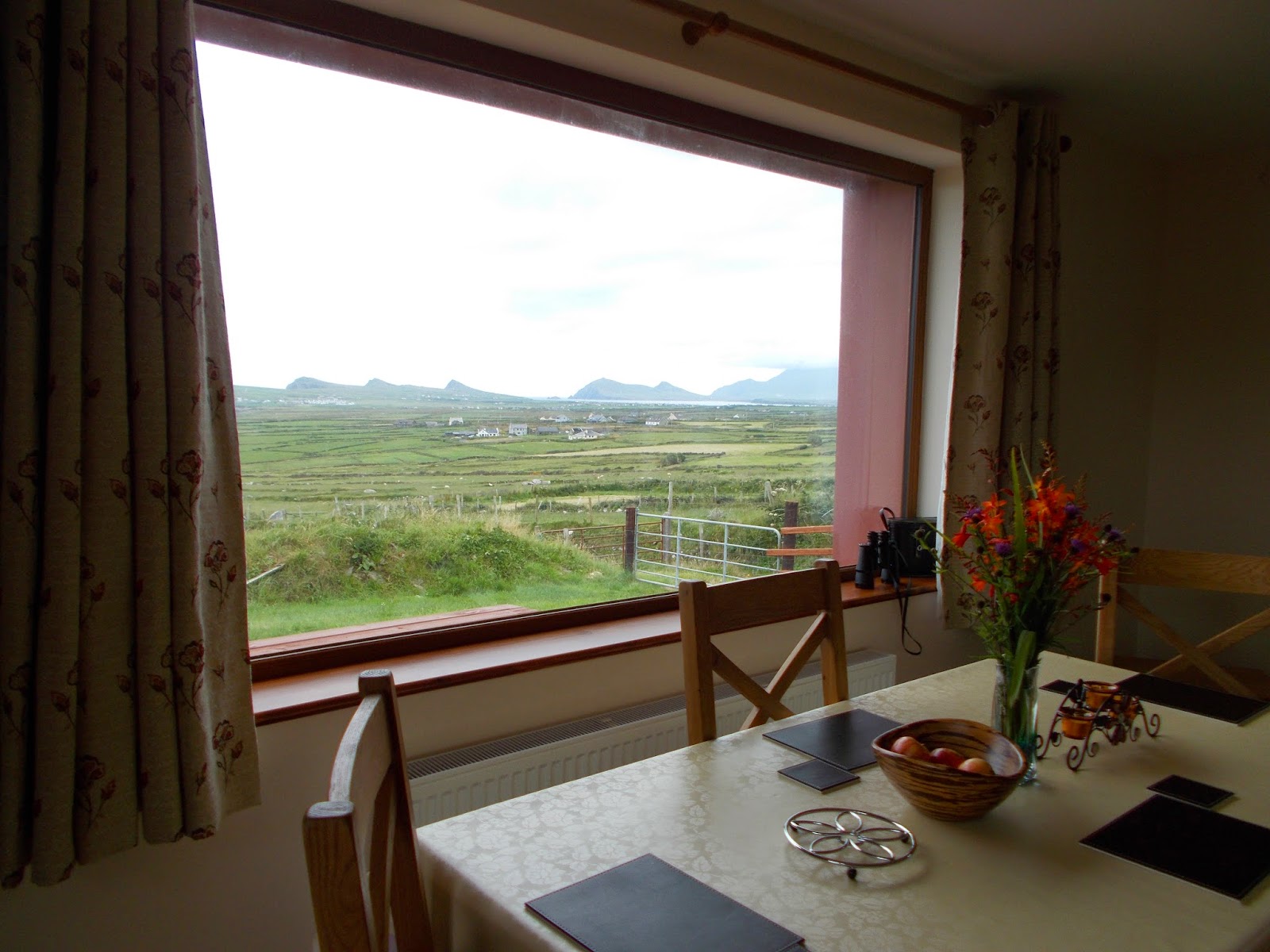 Sitting at this end of the table you could see all the way over to the Three Sisters, Ballydavid Head and Mount Brandon. We could pick out the spot we used to camp in and the pub across the bay. 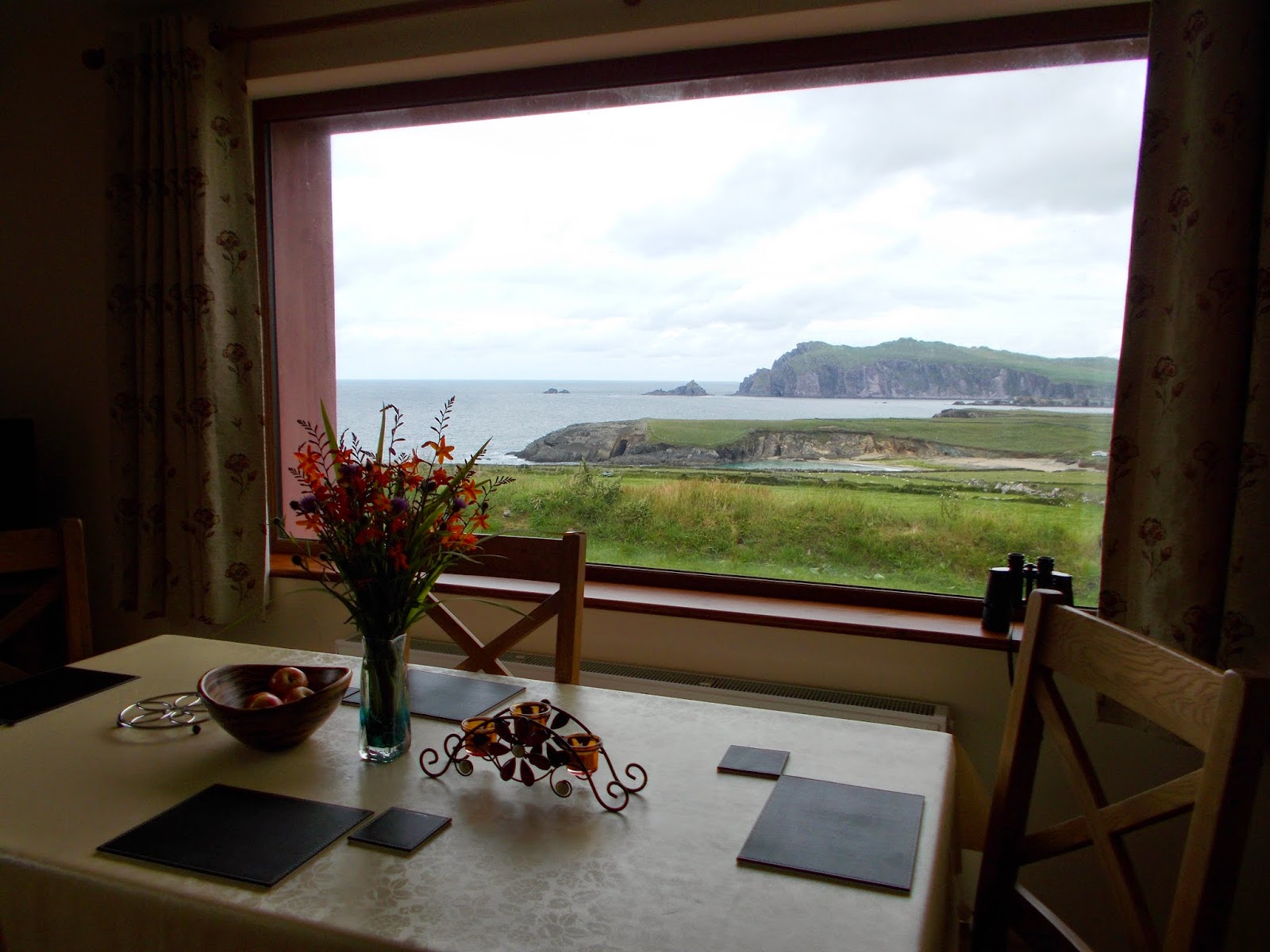 Sitting at the other end of the table you get a great view out to sea. My husband thought it funny that he automatically sat at the end where he could look over to the mountains and I chose the end where I could look out to sea. My Mum and Step Dad joined us for a few days in the first week and my Mum chose the same end of the table as me for the same reason without us having mentioned our preferences before hand! 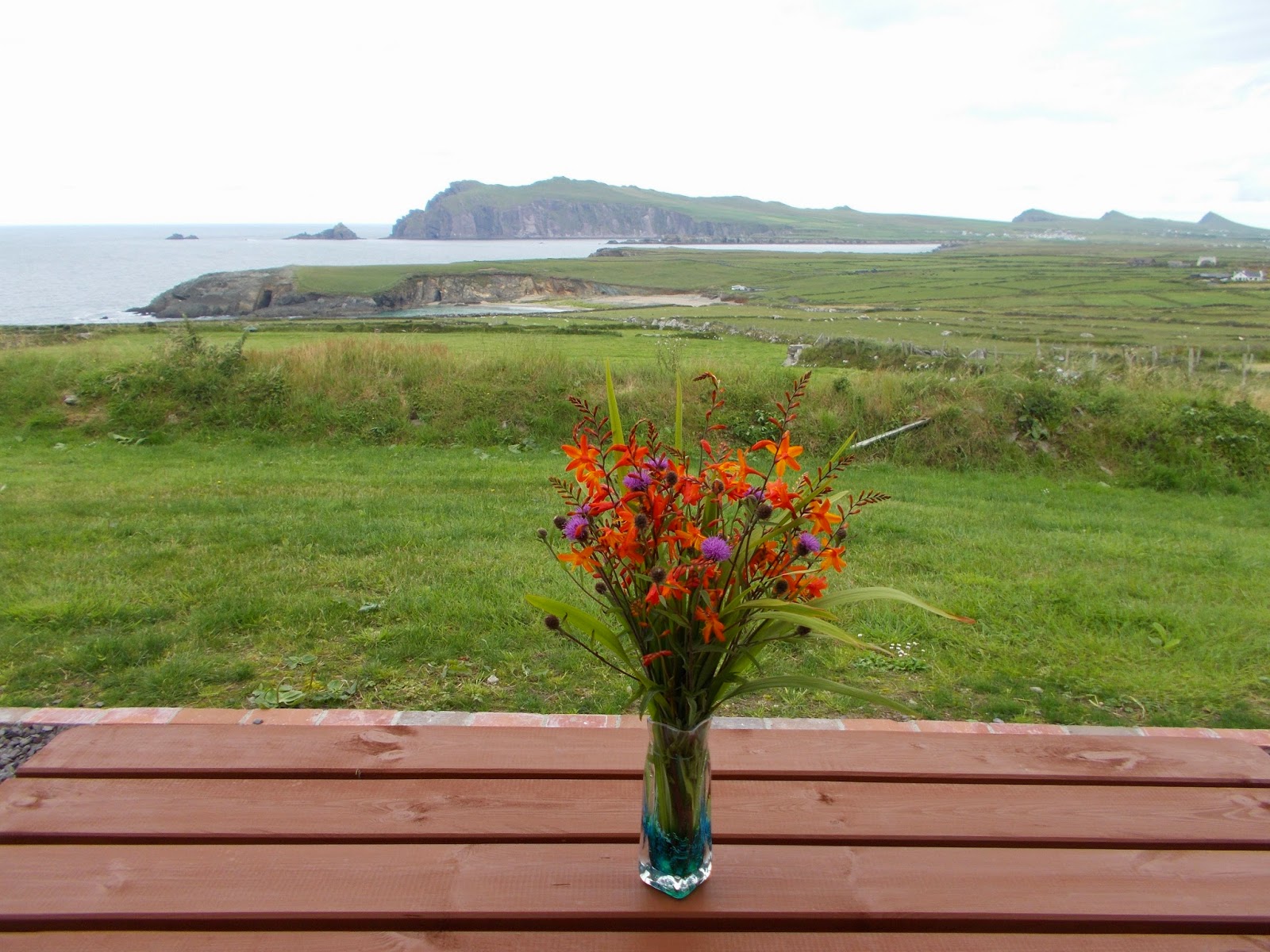 Of course sitting outside was even better. I was up so early with excitement on our first day there so I went for a walk along the road and picked some wild montbretia and mini thistle to put in a vase. 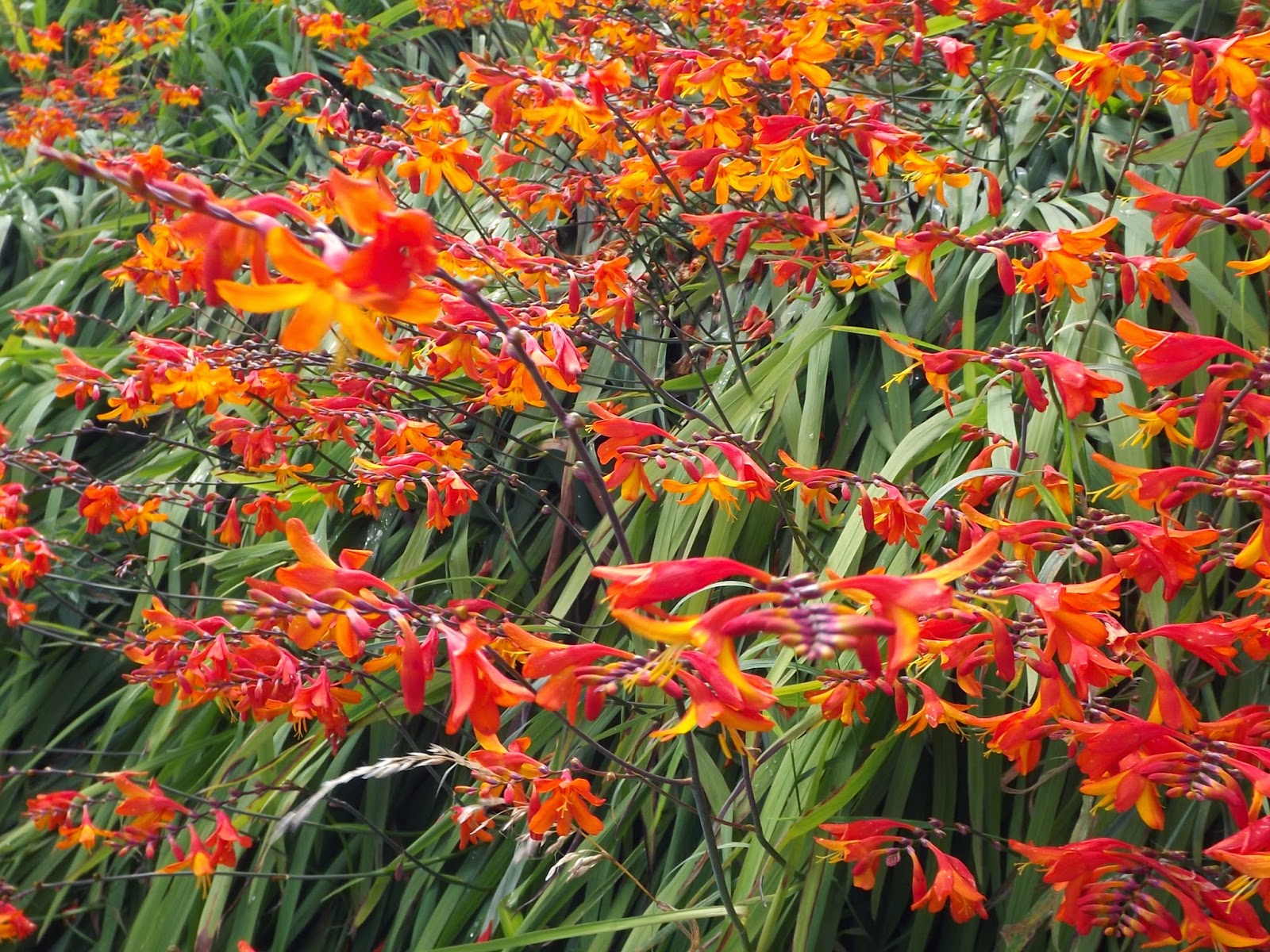 The montbretia grows in profusion all along the roadsides here as do beautiful fuchsia bushes and meadow sweet.

Another great feature about staying here was that we could walk down to the beach through the sheep field. 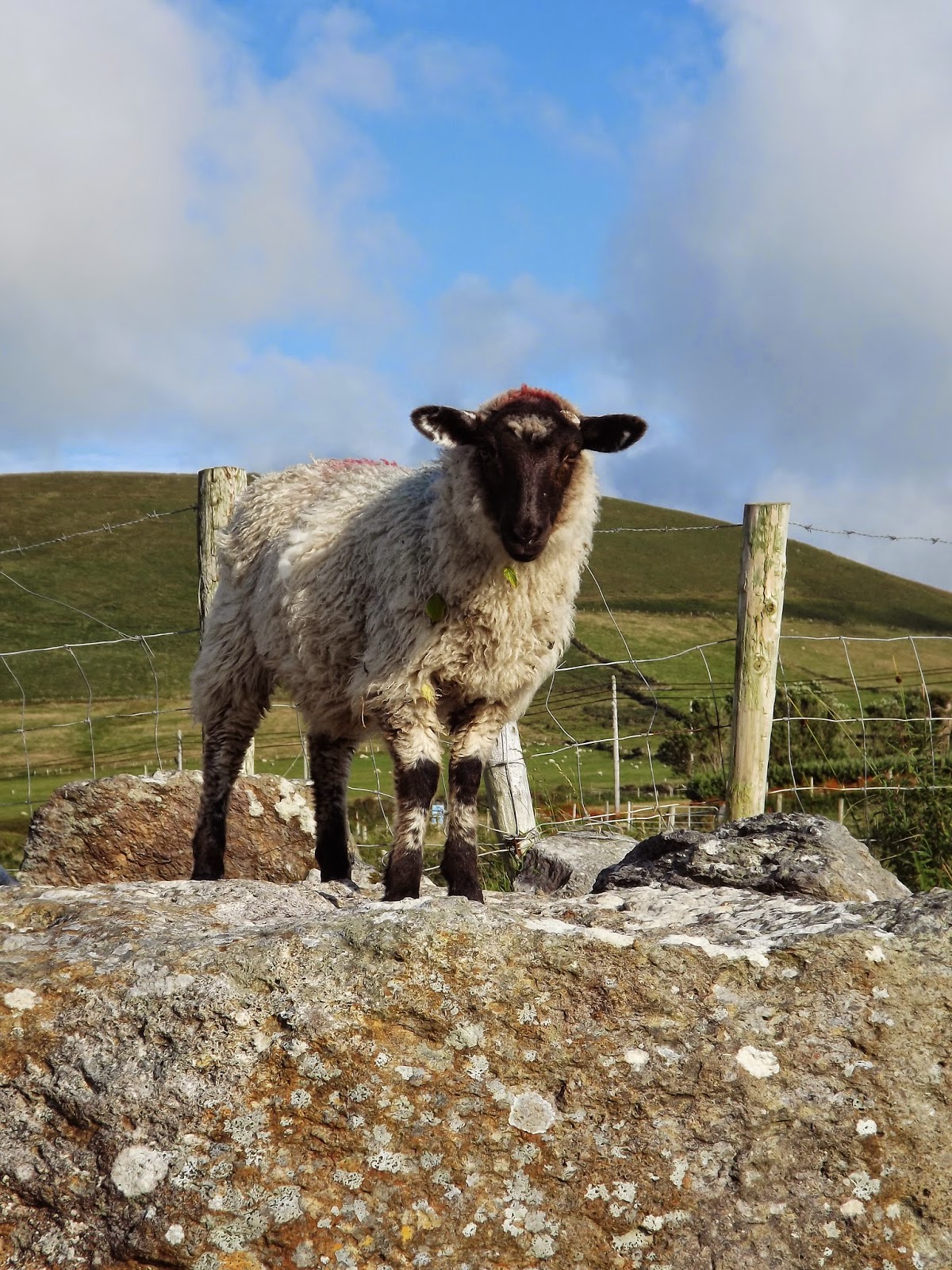 When the tide was out we could get right round to cave that we could see from the house. Clogher beach can be a real sun trap, in fact I can remember having a picnic here on the 29th December once, sitting on the boulders, basking in the winter sunshine. 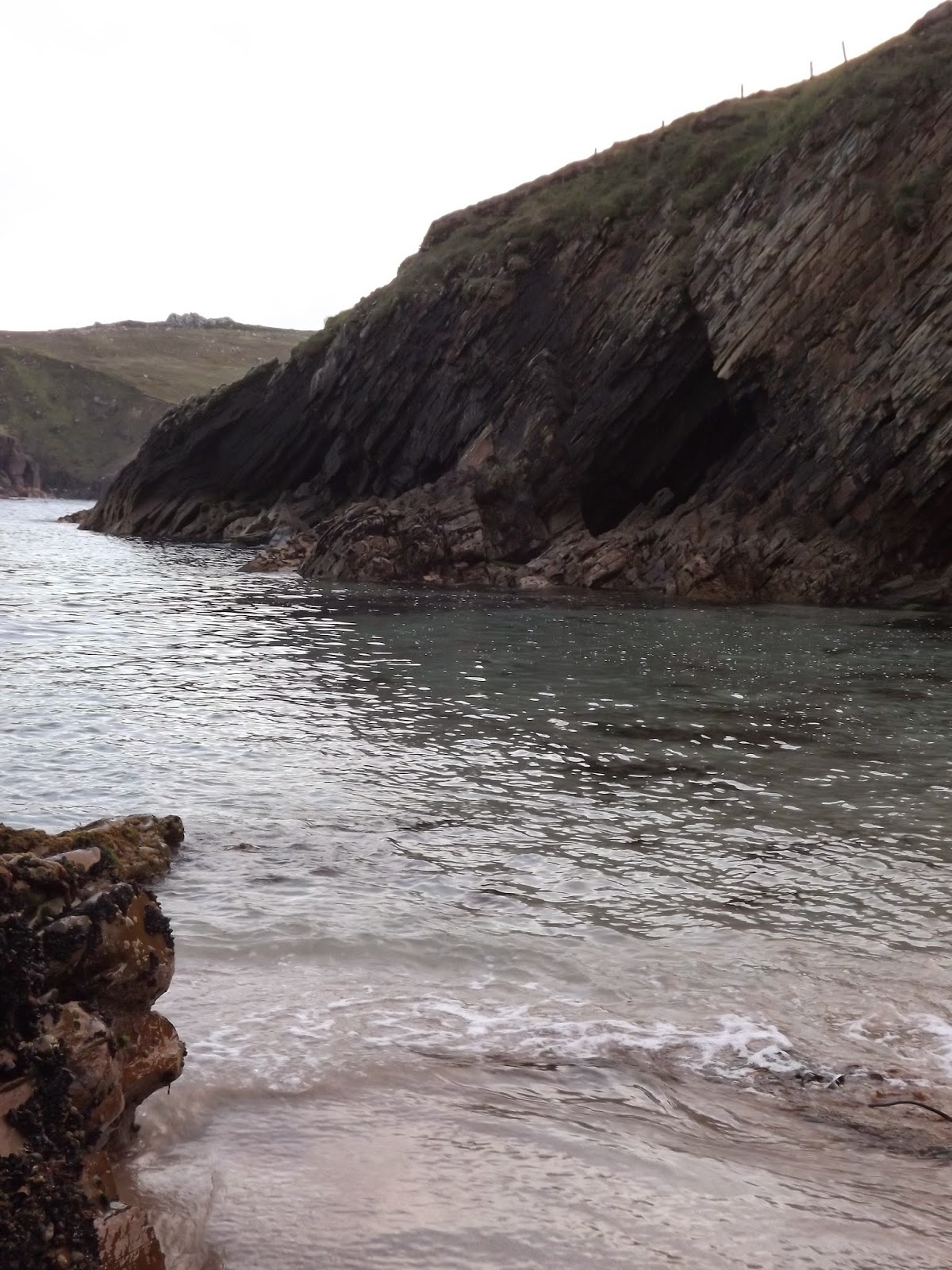 It wasn't winter this time though and we enjoyed glorious sunshine most days. 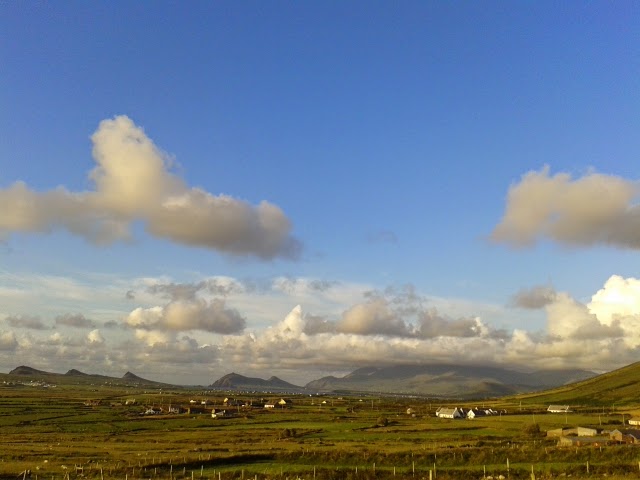 Back to the house though, here are some more photos taken inside. 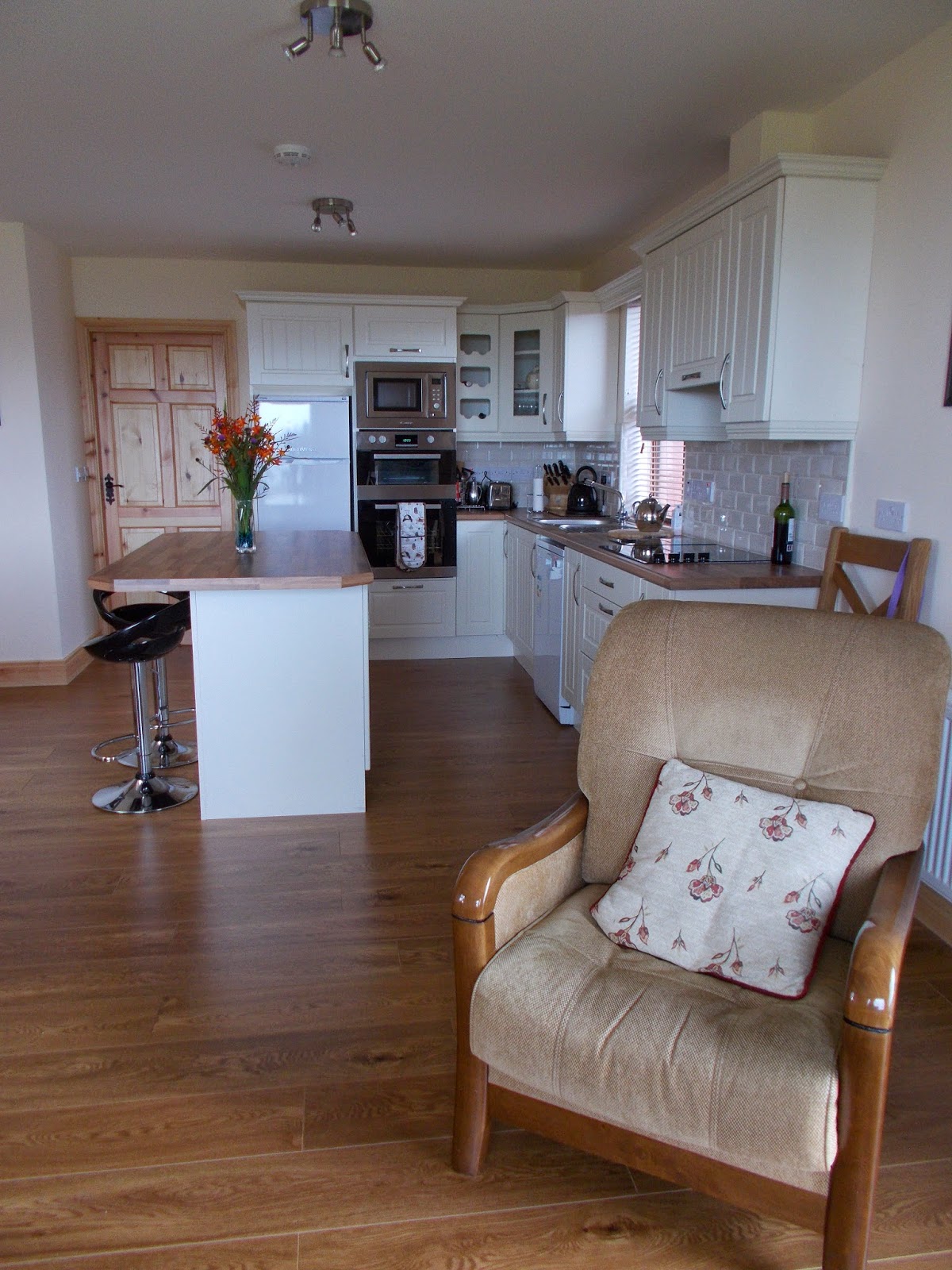 Our daughter loved sitting up at the breakfast bar. It became her 'spot' where she drew pictures and did jigsaws in between all our trips to the beach etc. 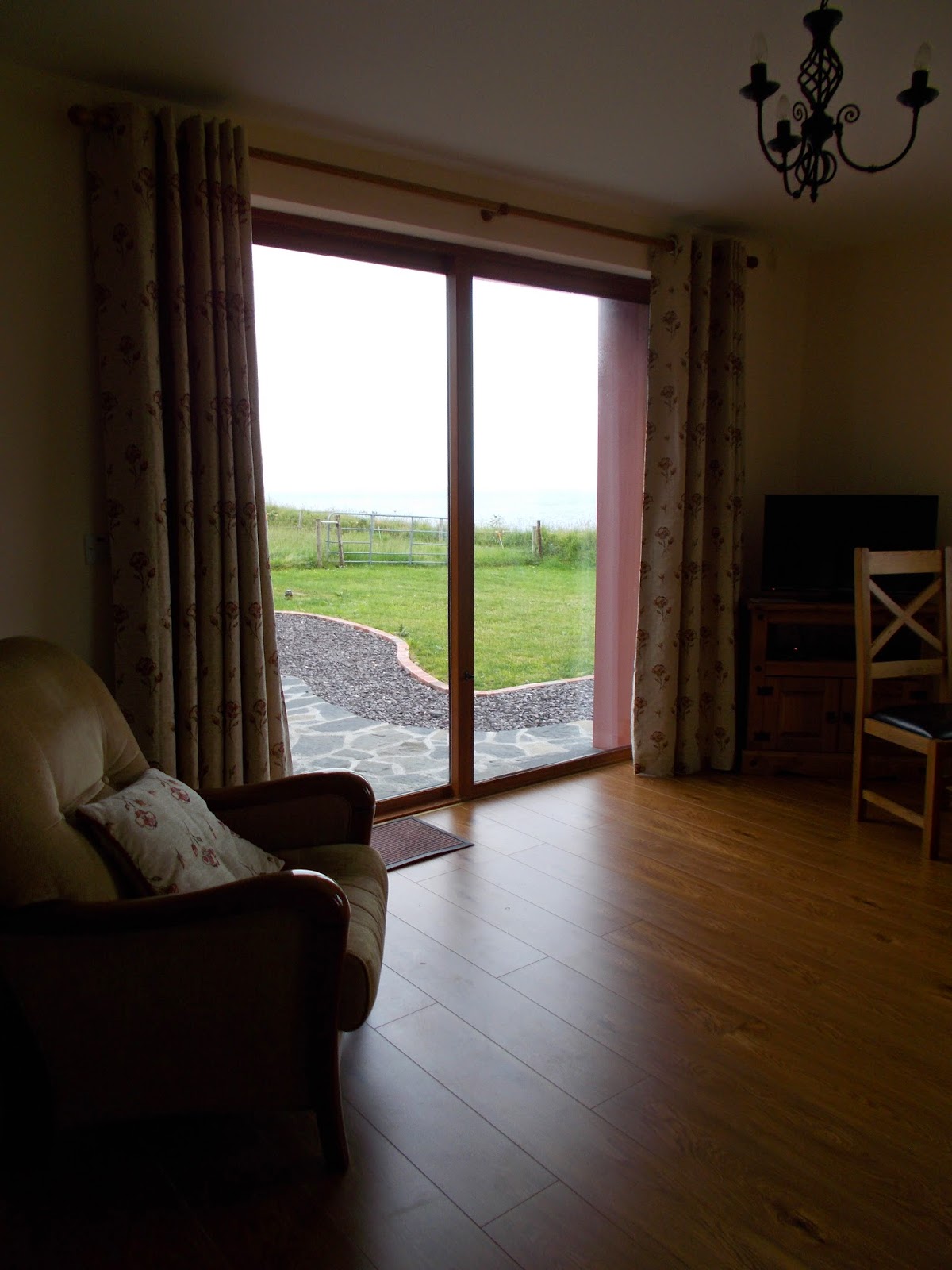 The patio doors let in so much light and gave fabulous views out to sea. 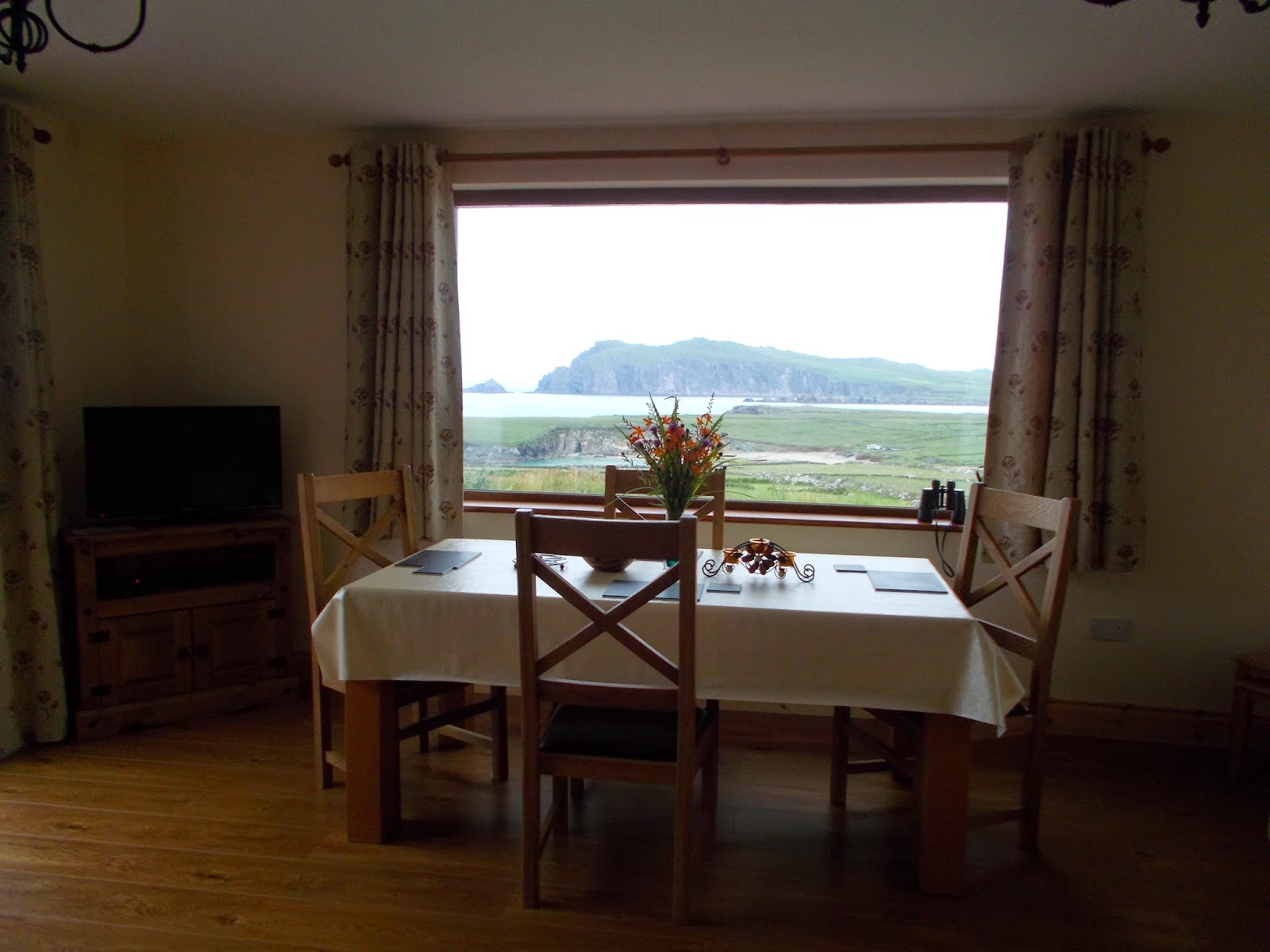 There was a TV but we never watched it. There was also a CD player with iPod dock. We were kicking ourselves for not taking some CD's with us. We managed to borrow a few from a friend in town which saved our sanity as we'd been playing the same one over and over again that we bought from a fiddle player on our first night out. There was free wifi too but I didn't take my laptop as I may have been tempted to work! We were able to access info we needed online through our phones and kindle.

The bedrooms were lovely and the beds so comfortable. Our room looked out to the same view as the big window downstairs and with the window open at night we could fall asleep to the sound of the sea.
The first thing we did when we got out of bed was to look out the window, even if we got up in the night! The stars were so bright being this far west with no light pollution. 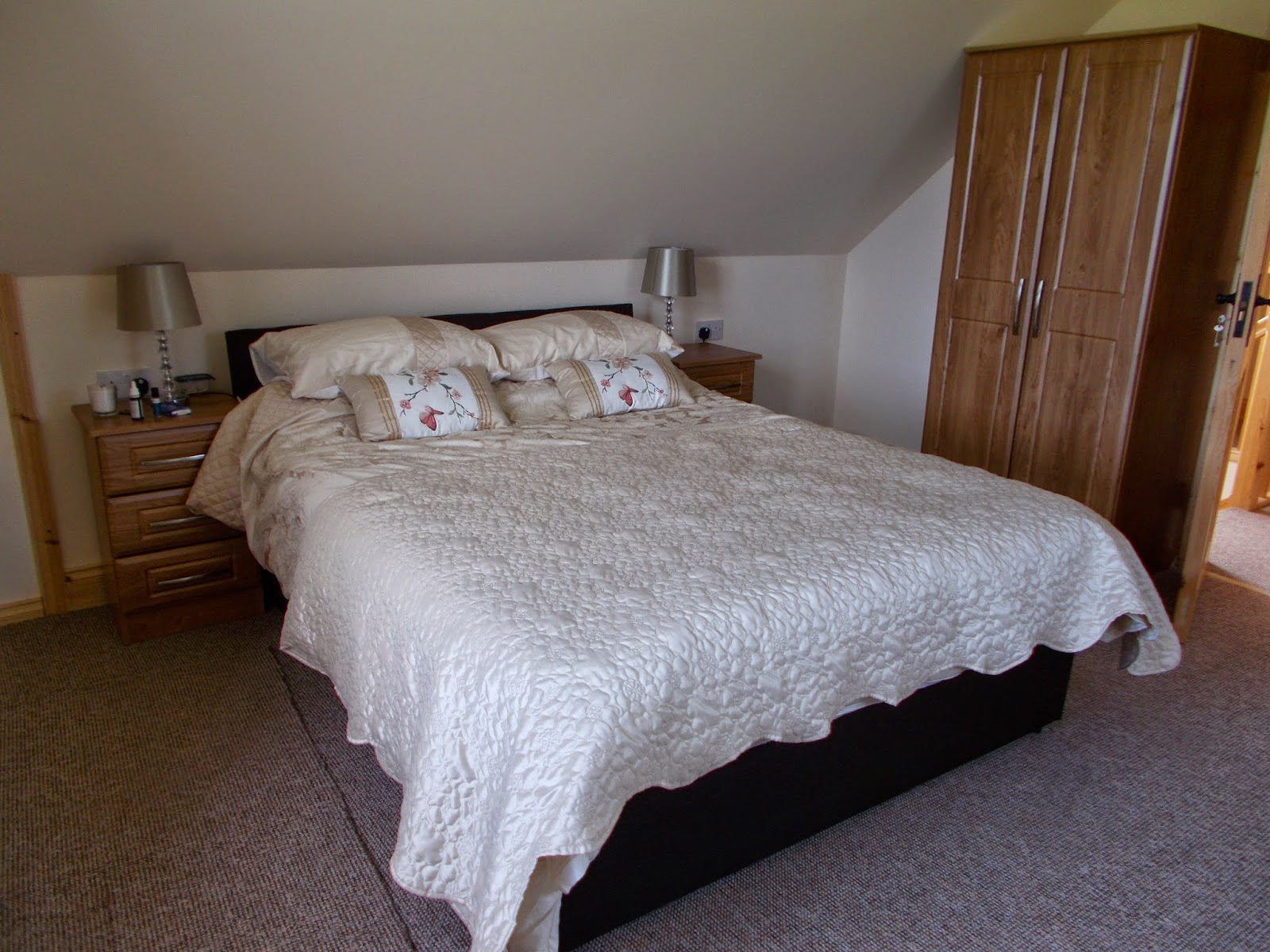 I didn't take any photos of the bathrooms but they were lovely. All shiny and new and immaculately clean. Both had power showers which were just the best thing ever to come home to after swimming in the cold sea. The downstairs bathroom also had a jacuzzi bath! I will admit to sitting in there a few times with a candle lit and a glass of wine.

And if the cottage and view were not enough to get excited about, look who visited the garden every morning! There were actually three hares living in the sheep field adjacent to the garden and this one came hopping around the patio every day. One morning when I was sitting outside drinking my coffee, two of them came right into the garden without noticing me. I sat really still and they sat twitching and sniffing and then hopped off into the field. It was amazing to be so close to them. 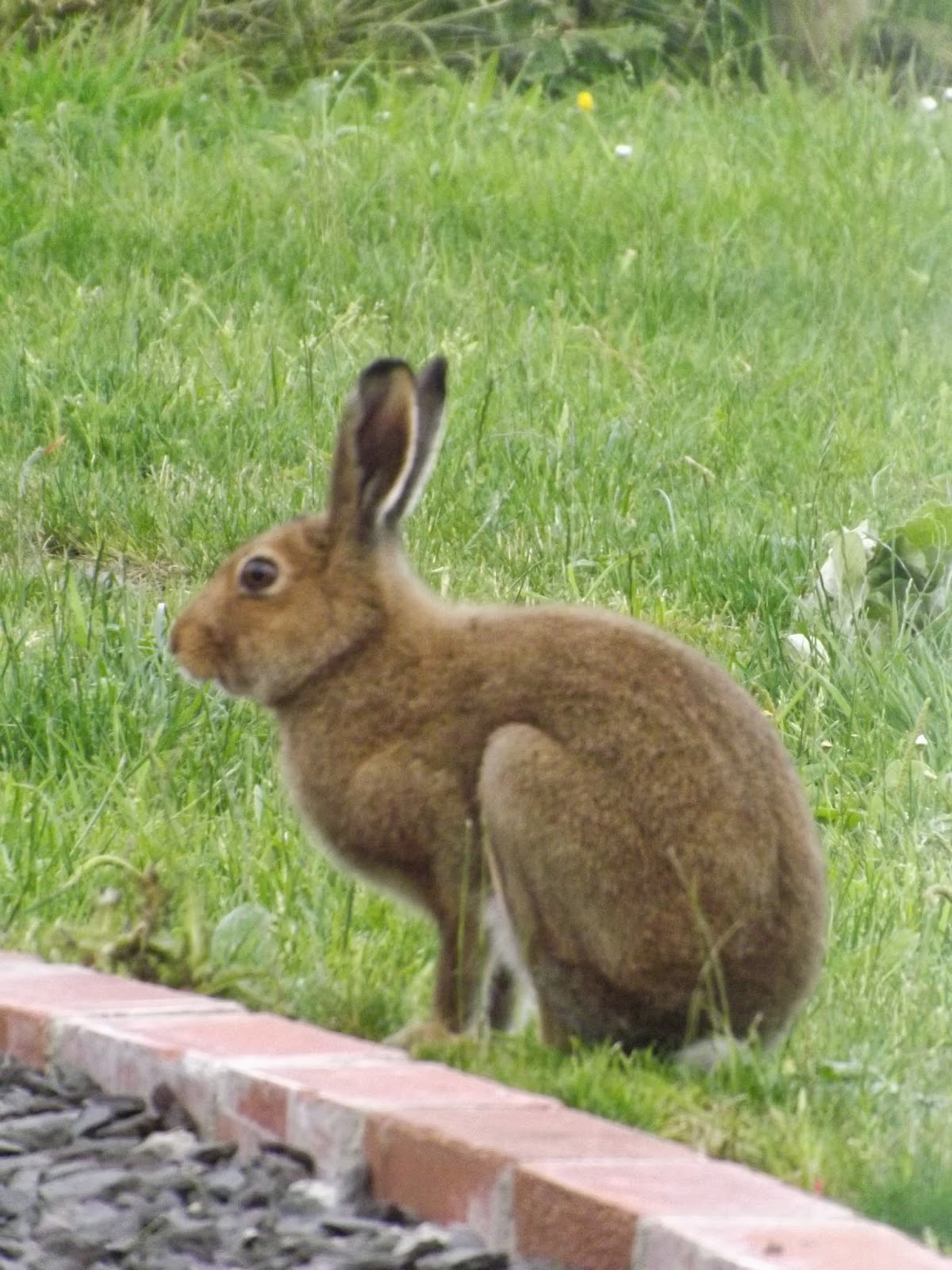 Just down the road from An Sciobol is the cafe Tig Aine. We didn't actually go in this year but have been in in years past and it really is lovely. The same views as we had and food served from 11am - 8pm. This stone is in the car park and you can see An Sciobol, the smaller of the two cottages behind. 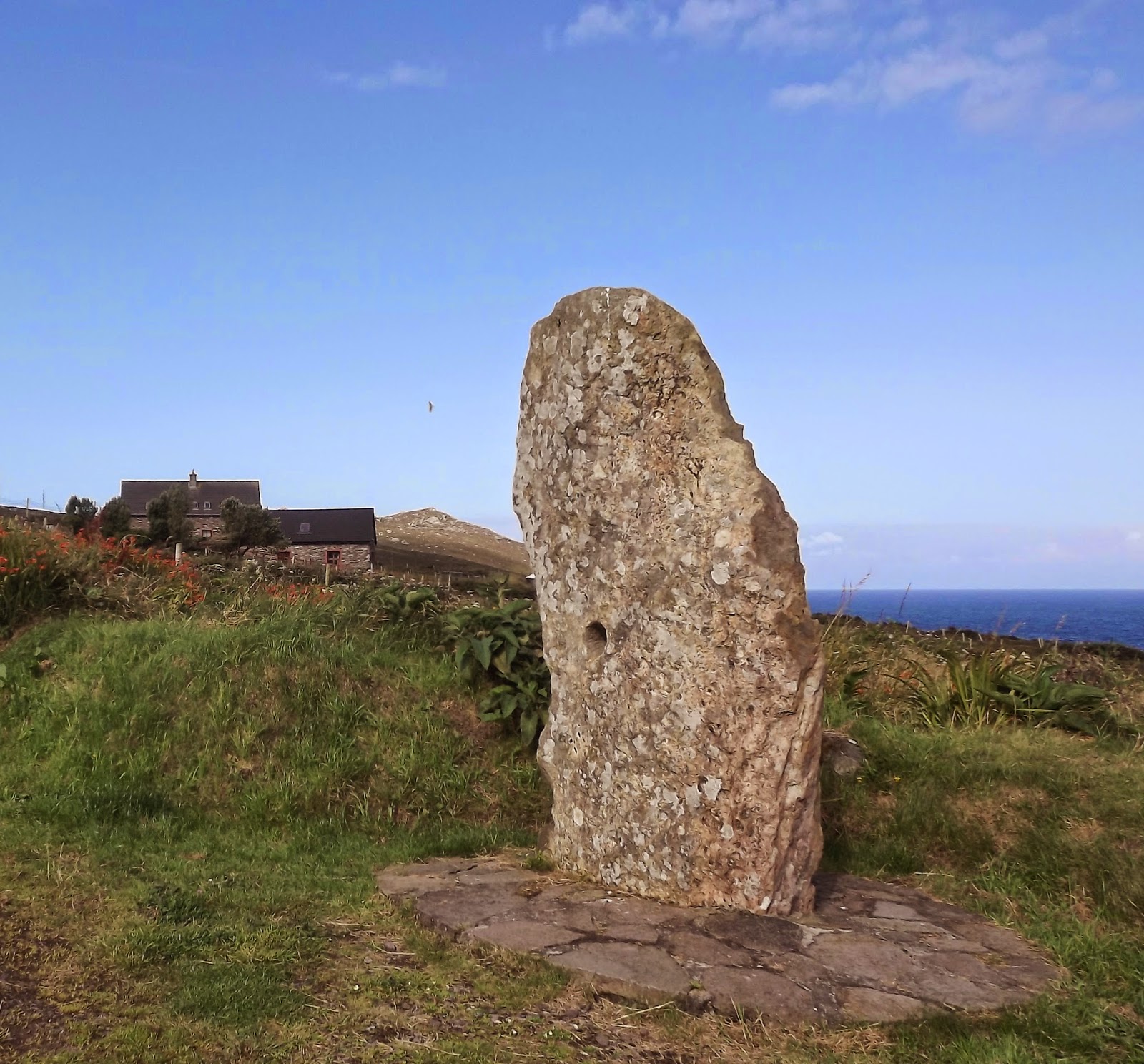 A five minute walk in the other direction brings you up to Clogher Head, one of the most popular view points on the Slea Head Drive. As soon as the path reaches the ridge you get this fabulous view of the Blasket Islands. 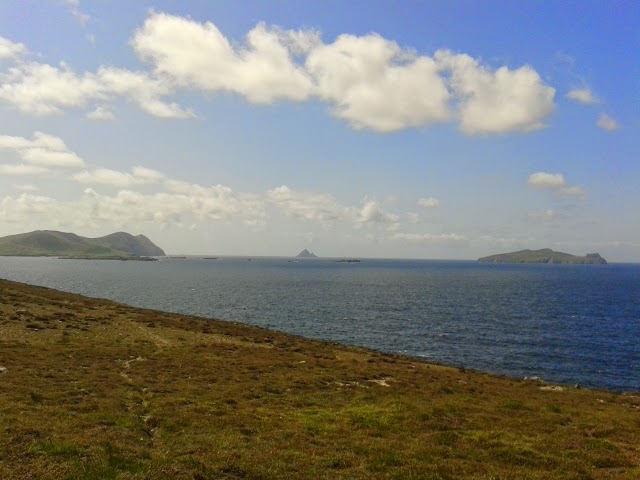 The cottage is also close to all our favourite spots around the peninsula.
Coumeenole Beach is just a three and a half mile drive along the coast. 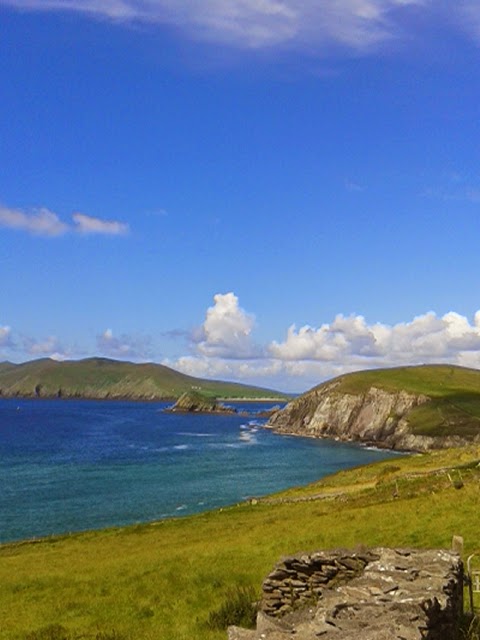 We love this beach. It can be dangerous so we stick to the shallows and just enjoy the waves and the beautiful bright turquoise water.

I saw a large sea mammal of some sort here one of the days. I large black back and fin surfaced a few times quite far out. I thought it too big to be a dolphin so it might have been a minky whale which are often seen in these waters. 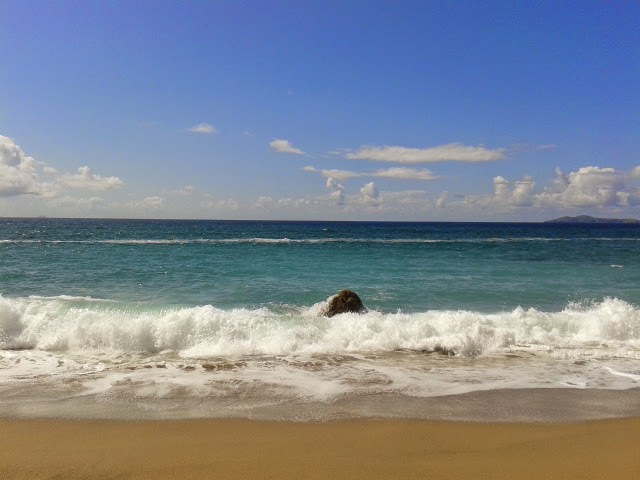 Our other favourite beach is just along the road in the other direction at Wine Strand.
This little beach is on Smerwick Harbour Bay and is quite often flat calm. This year we enjoyed the waves though and even got a chance to use body boards. Mount Brandon in the distance there is Ireland's second highest mountain. It is often covered in cloud and you only see the top one day out of ten. We were lucky enough to see it a few days in a row. 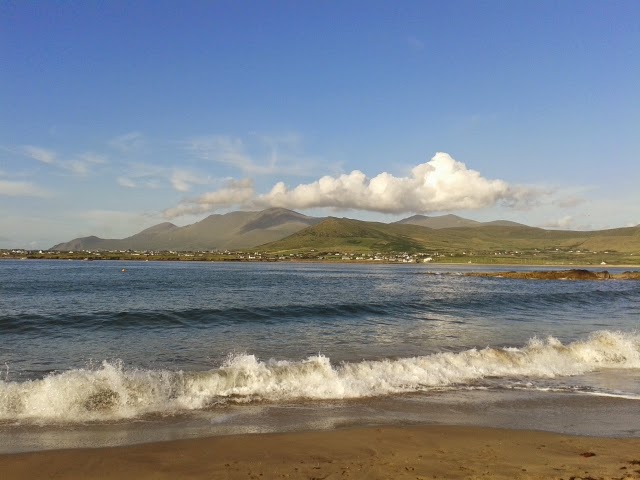 Of course the sun doesn't shine every day in west Kerry but even when it doesn't, the scenery can still be stunning.

I took this photo above from a little headland down by Ferriter's Cove. You'd think I'd set the camera to black and white but actually it is in colour. The weather had just started to close in but the light got through a break in the clouds for about ten minutes or so and danced so beautifully on the water with Inistooskert/The Sleeping Giant in the background.


We were delighted to see these sunsets from the garden of the cottage. 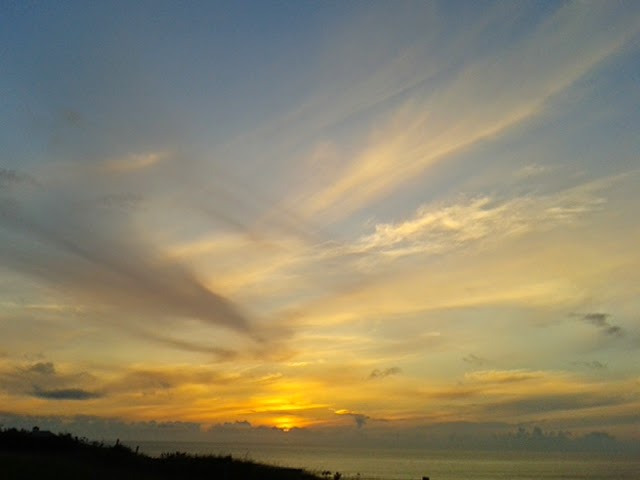 The perfect end to a perfect day wouldn't you say? 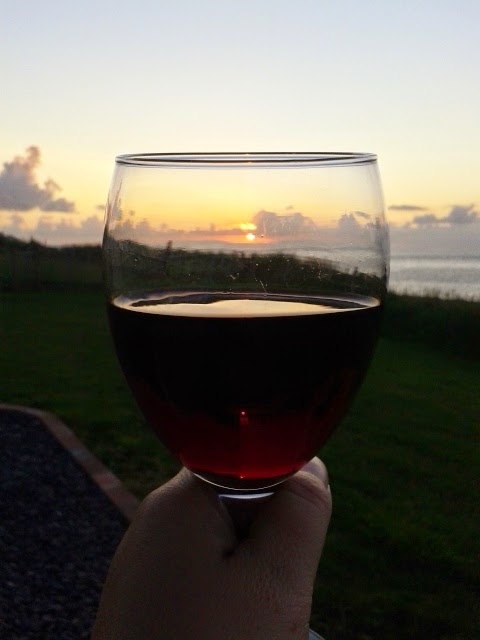 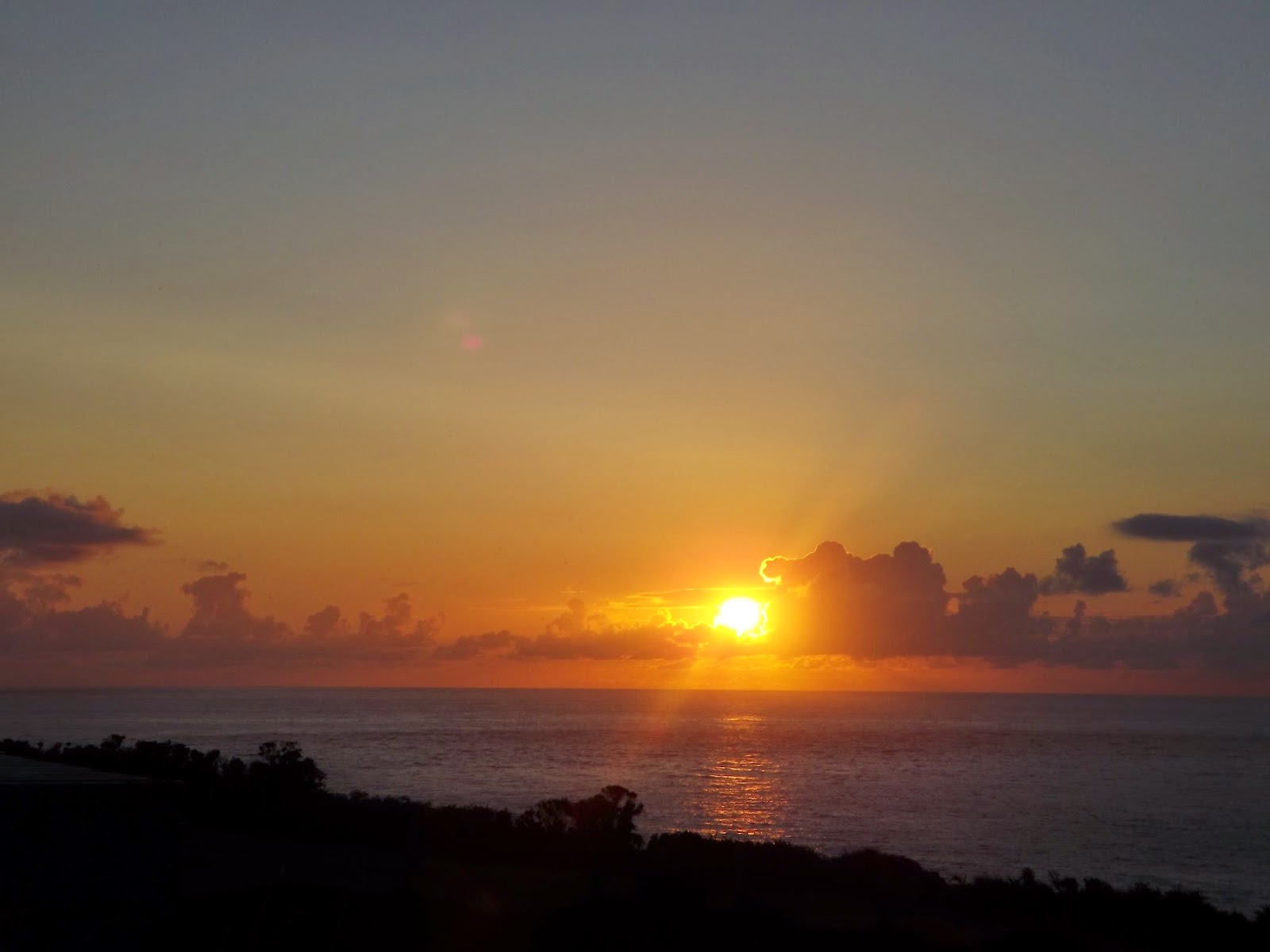 An Sciobol Cottage is not listed on the internet yet but you can make enquiries about booking it through this website here
Phil and Alec O'Conner who built the house also have other cottages to let locally including a 4 bedroomed one similar right next door. They are such lovely people and local too. It was important to us when looking for a house to stay in that we supported the local economy rather than some faceless company with no real link to the area.

I have been visiting the Dingle area on and off for 19 years now and can honestly say that staying in this little cottage made this the best trip ever. We could have gone for a cheaper cottage but the way I see it is that if you are going to spend money on accommodation that will suffice, then why not spend a bit more and get something utterly fabulous that will make your holiday perfect. An Sciobol was worth every penny ❤

Posted by Aileen Clarke Crafts at 07:05