We enjoyed this view of the Dingle Peninsula every day on holiday (see previous post) and decided that we would definitely hike along the Three Sisters at some point during our stay. The Three Sisters are those three little peaks you can see slightly left of centre. Their Gaelic names are from right to left, Binn Diarmada, Binn Meanach and Binn Hanrai.

The first time I ever came around the Slea Head Drive I remember marveling at the landscape and thinking that the land looked like waves that had solidified into rock just as they were cresting. I thought that the walk would involve hiking along the base of the peaks, seeing over the edge at the areas in between.
How wrong was I! 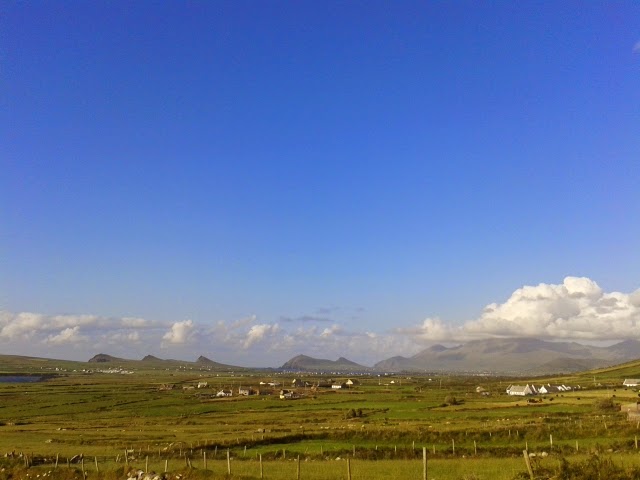 The day we chose to hike them was a bit dull to say the least.We had been going swimming at Coumeenole first thing every day so a dull day seemed like a good day for a hike. We drove to the foot of the furthest away hill and set off over moorland and heather just as it started to rain. My 9 year old daughter was less than impressed with this and huffed about it so much that I thought the whole expedition was going to be a disaster.
I decided that we would take a short cut up to the shoulder of land between the first and second peak and let David go the long way round the path.

The landscape was pretty bleak. Boggy with heather and bare patches in between. My daughter soon perked up when we realised that the bare patches were scattered with quartz and there was the possibility of finding crystals like we had found at the beach the day before. 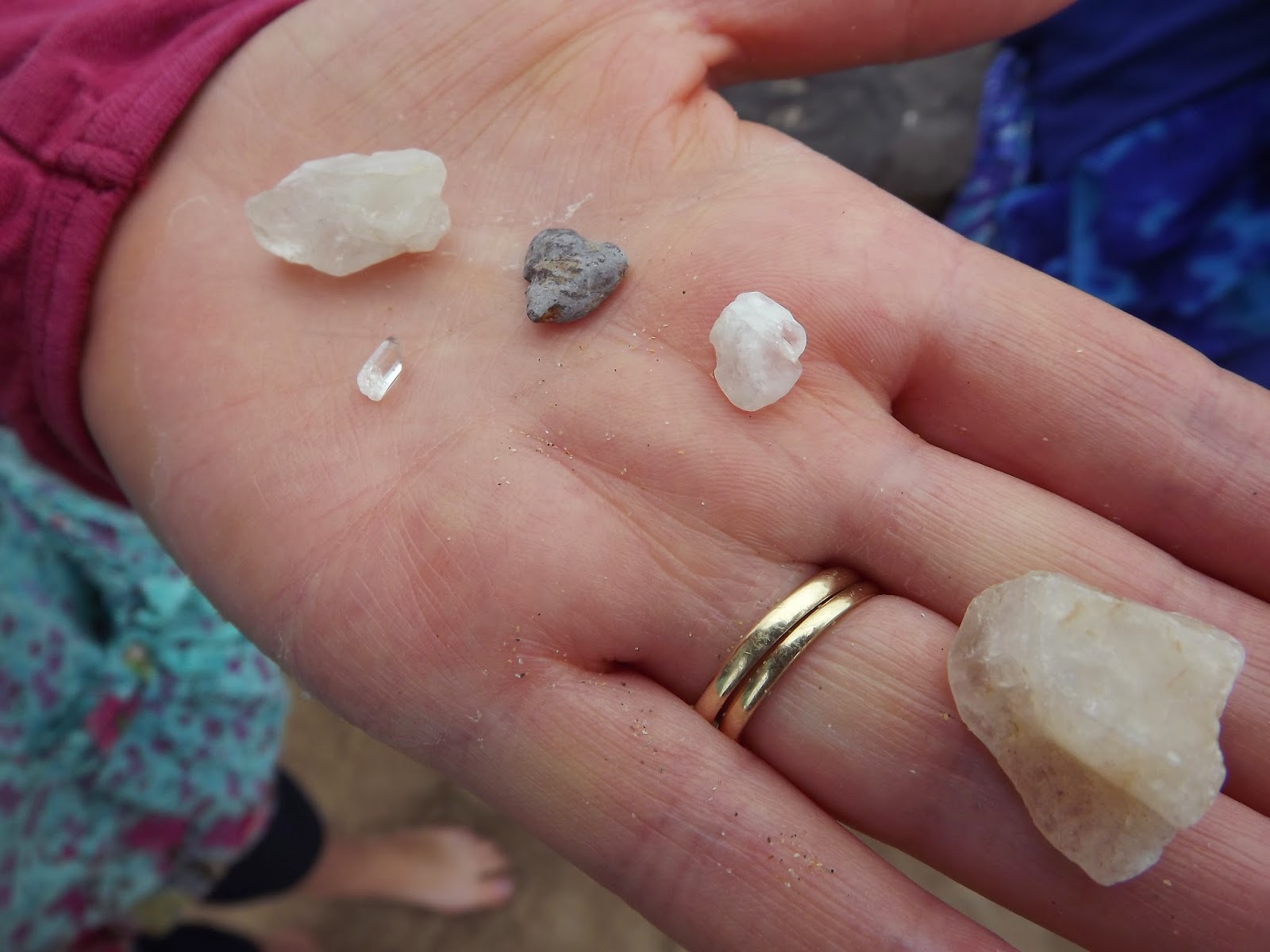 A poor old sheep's skull was a source of fascination as well. 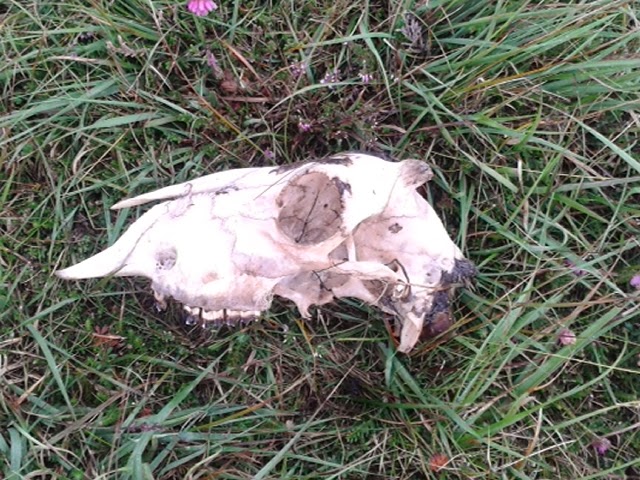 So we got to the ridge in a better humour than we had set out in and I was quite happy to sit here and wait for David but Ciara was so enthusiastic by now that she wanted to climb higher. 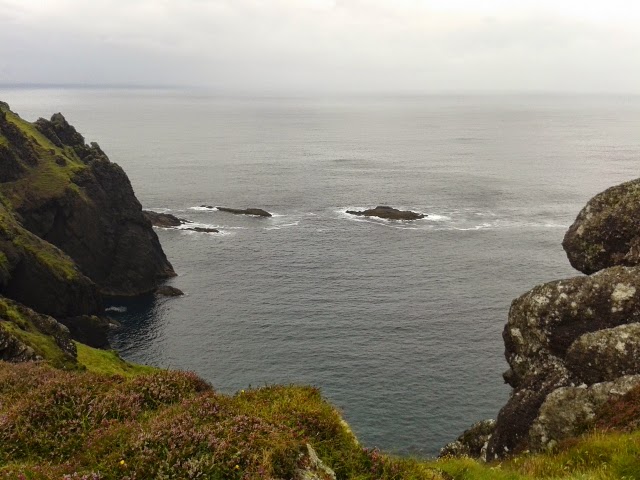 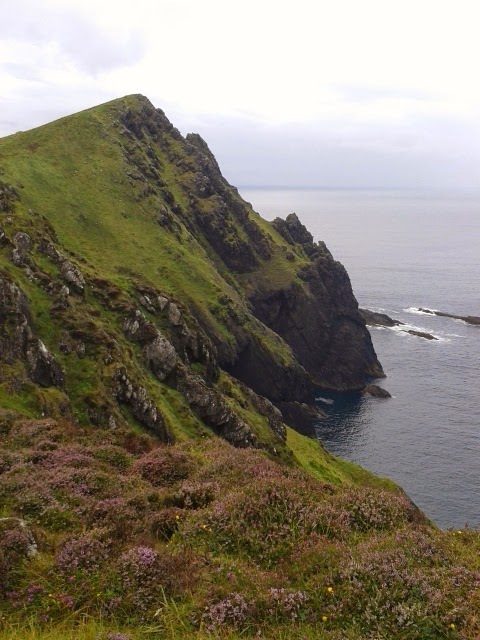 I was a bit nervous at this point as there was a sheer drop to the side of us so I didn't take many photos. 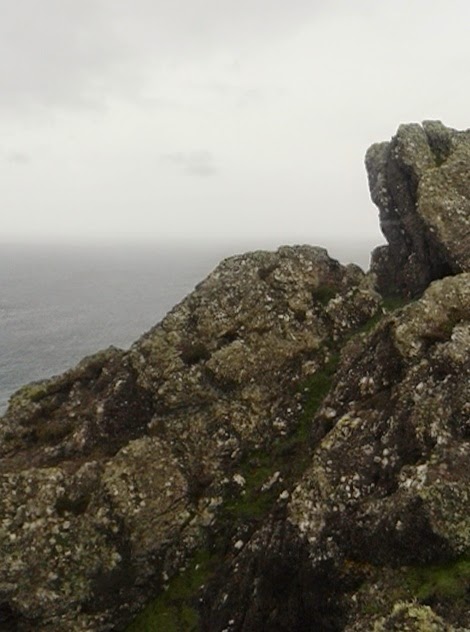 We met David coming down and he encouraged us to go higher and low and behold we ended up sitting right up here on top of the peak! 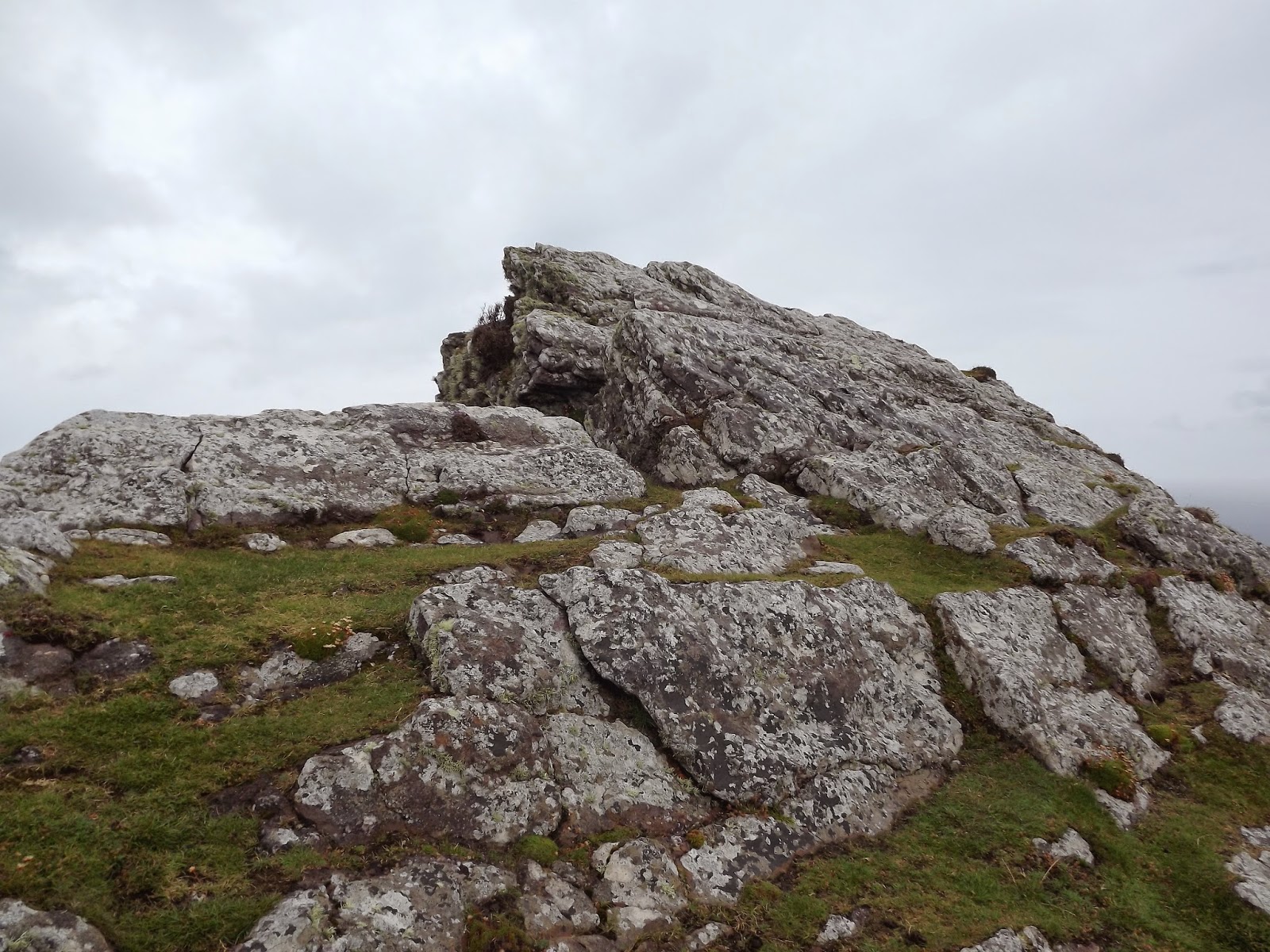 I feel a bit giddy looking at this photo now. We were sitting right up there on the rocks and I did turn round and peek over the edge but I didn't dare fumble with my camera for fear of it or me going over the edge. 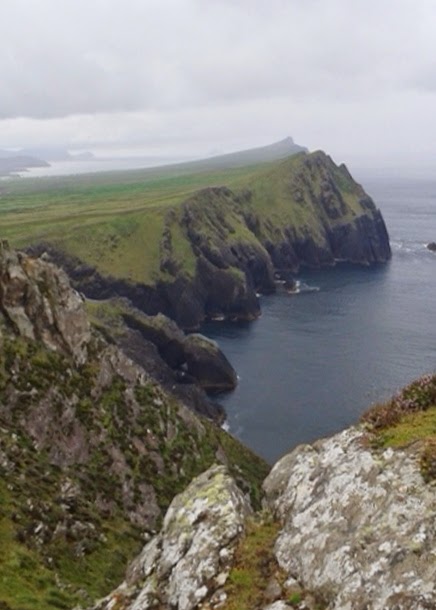 This is looking from the first peak south across the other two with Sybil Head in the distance and the Blasket Island beyond that.

We stopped for a shivery bite on the lower area between the peaks. This is not as precarious as it looks, there is actually grass and sheep in front of us here. 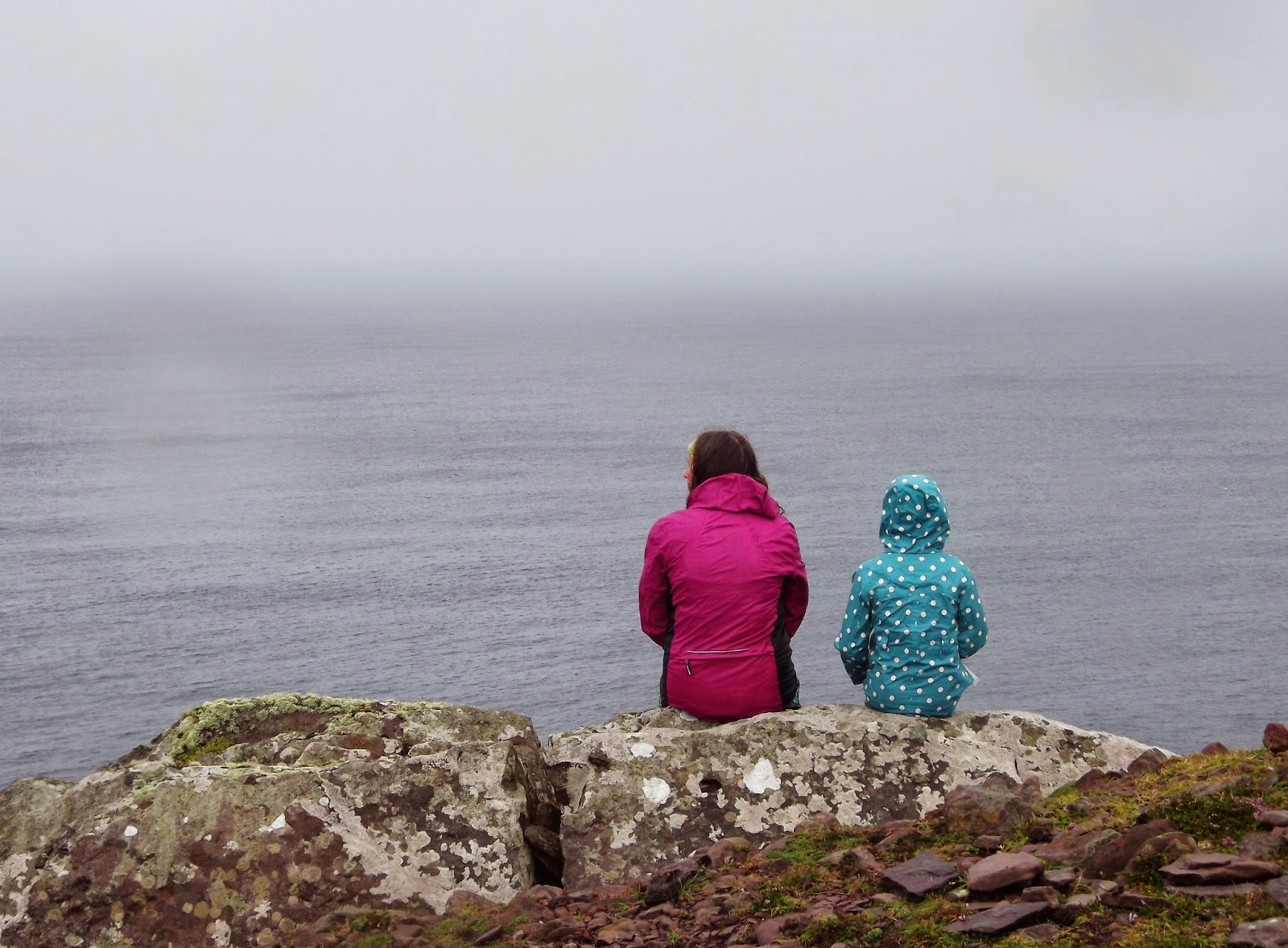 So my notion that the hike would take us along the base of the peaks was completely wrong. We actually walked up and over all three of the sisters! 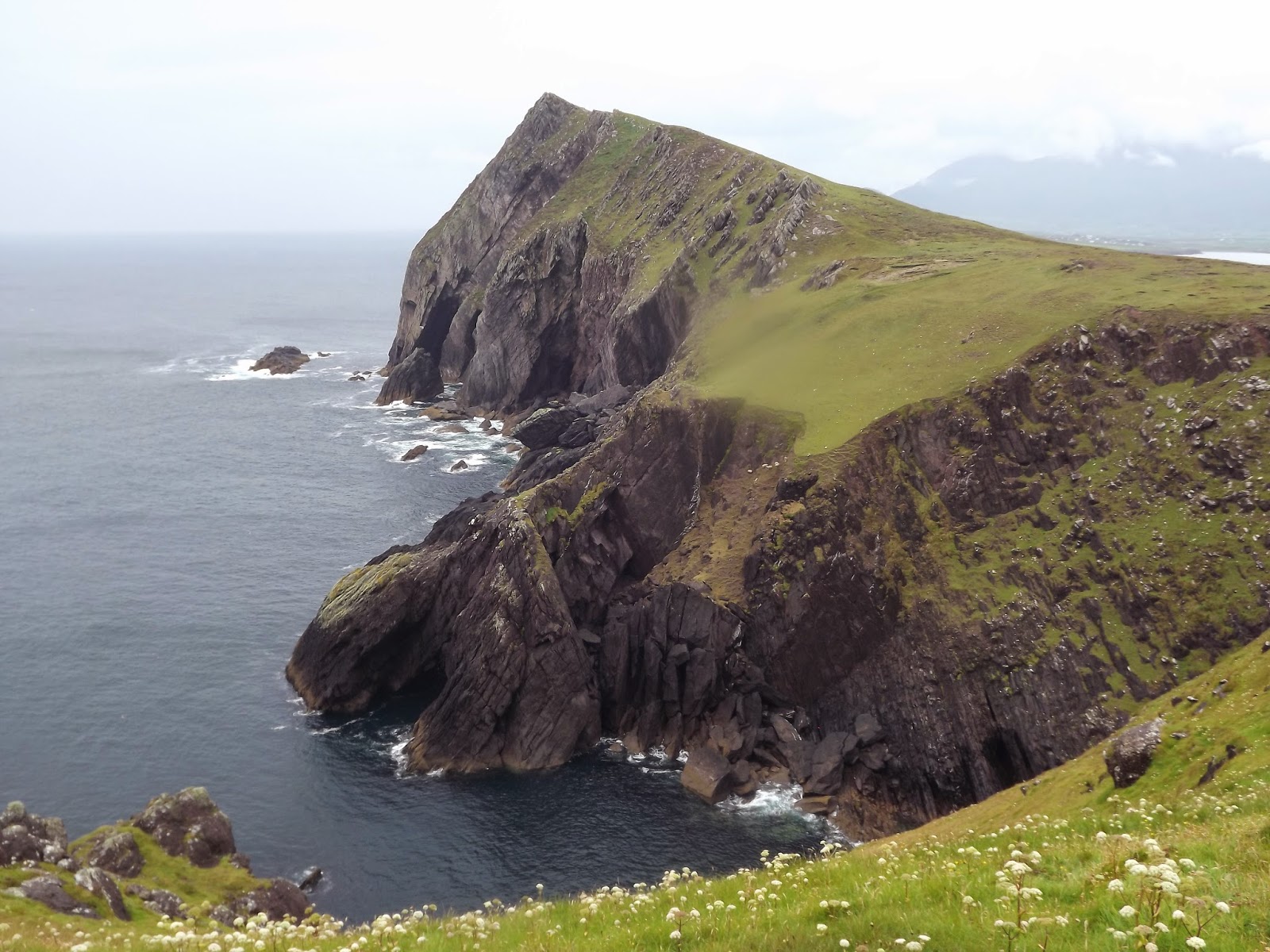 Looking back along to Binn Diarmada.
I'm thinking these peaks must have had much older names as this one is named after the Spanish Armada, some of which were wrecked around here in the 1580's. 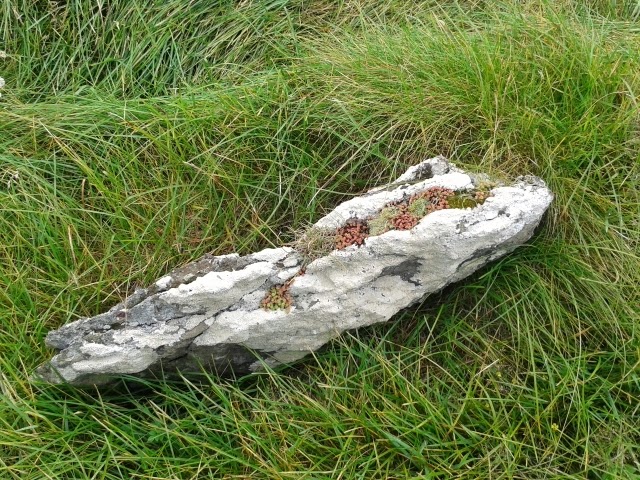 Lovely colours and textures in the rocks. 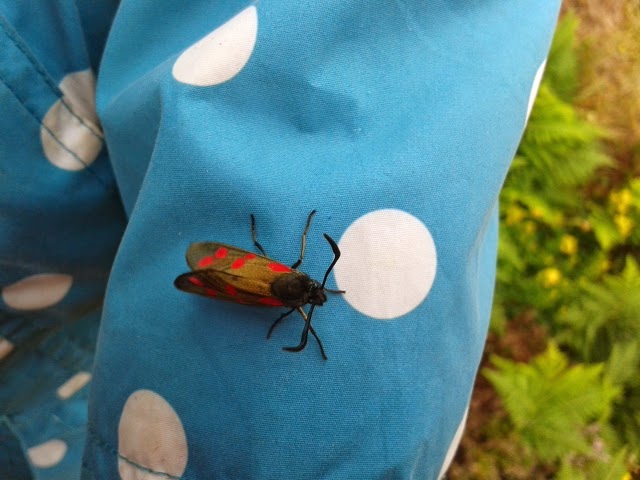 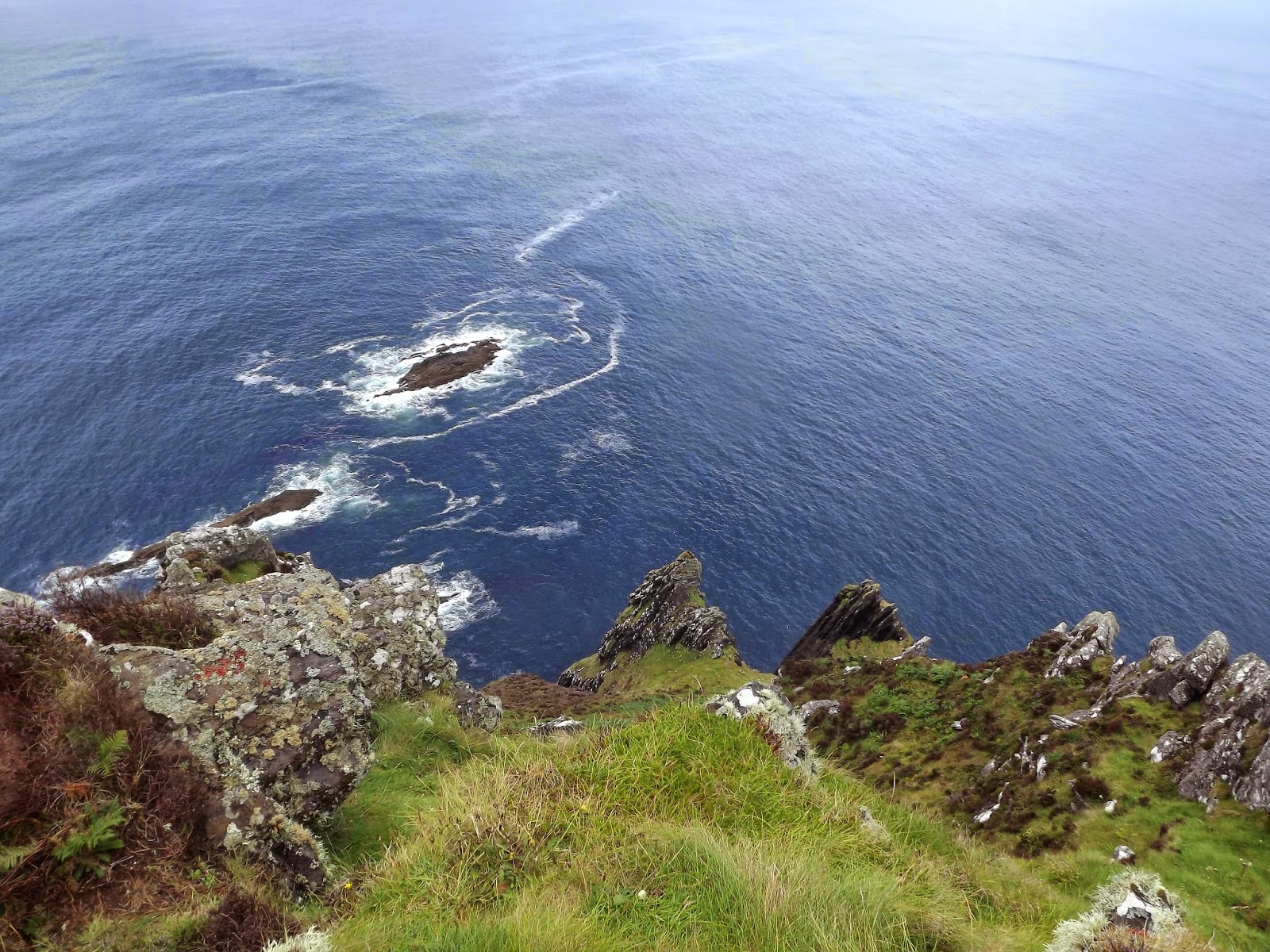 I was not close to the edge on purpose here, this was where the path took us! 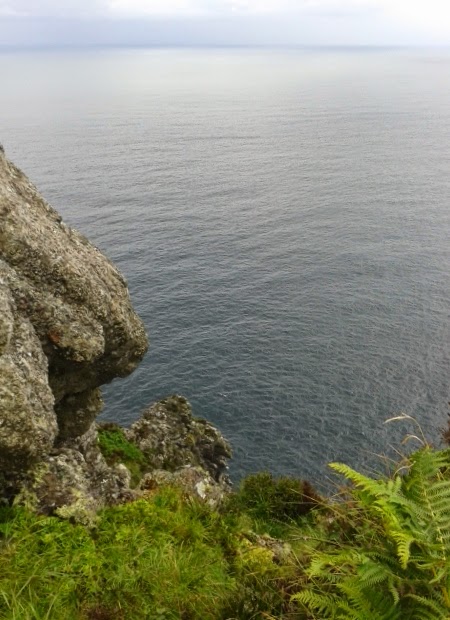 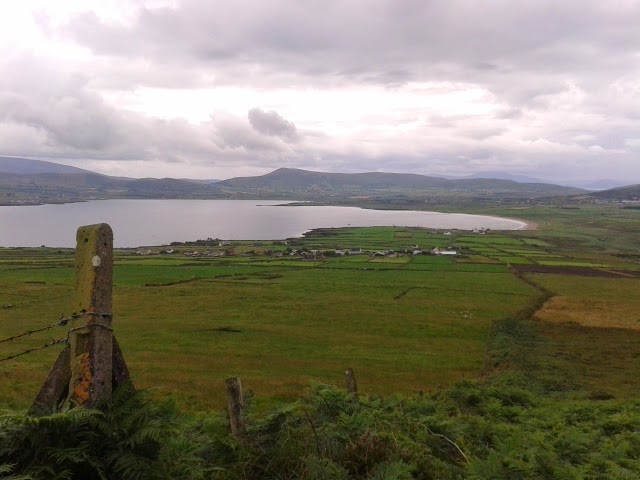 Looking back over Smerwick Harbour Bay. 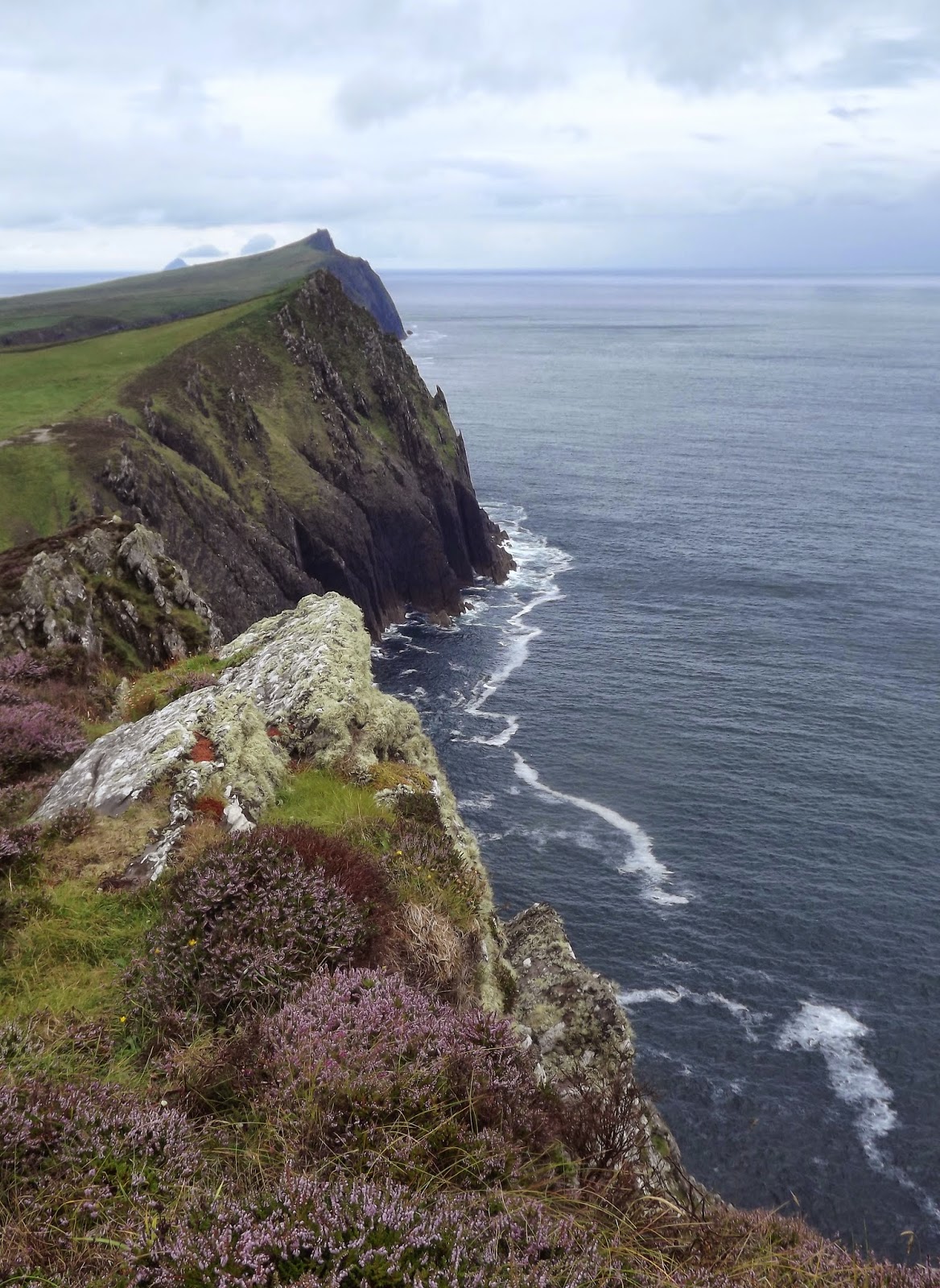 The view from Binn Meanach. 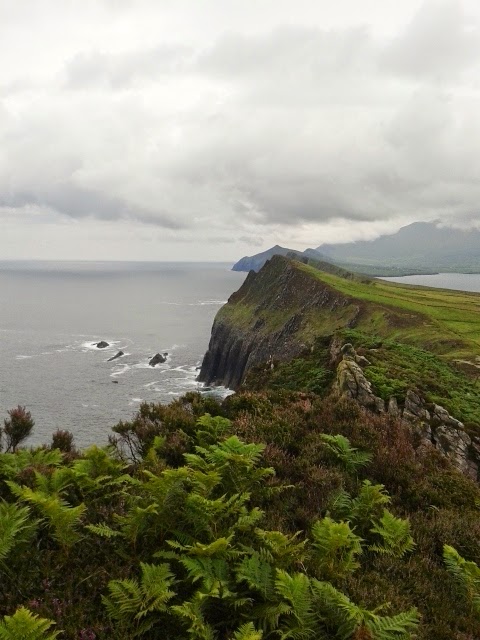 The vegetation changed to thick bracken, heather and gorse on Binn Hanrai. 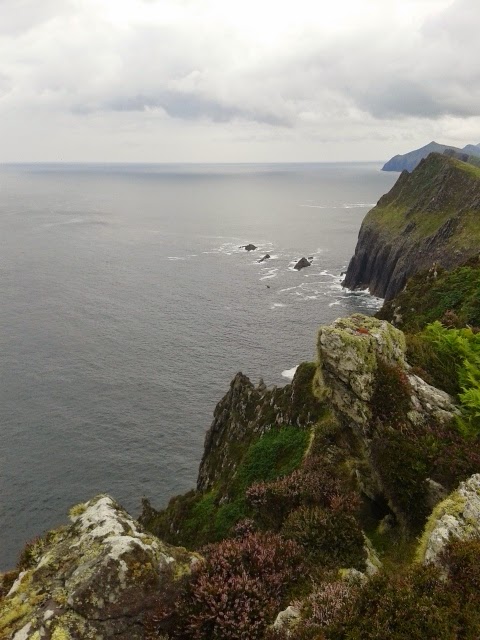 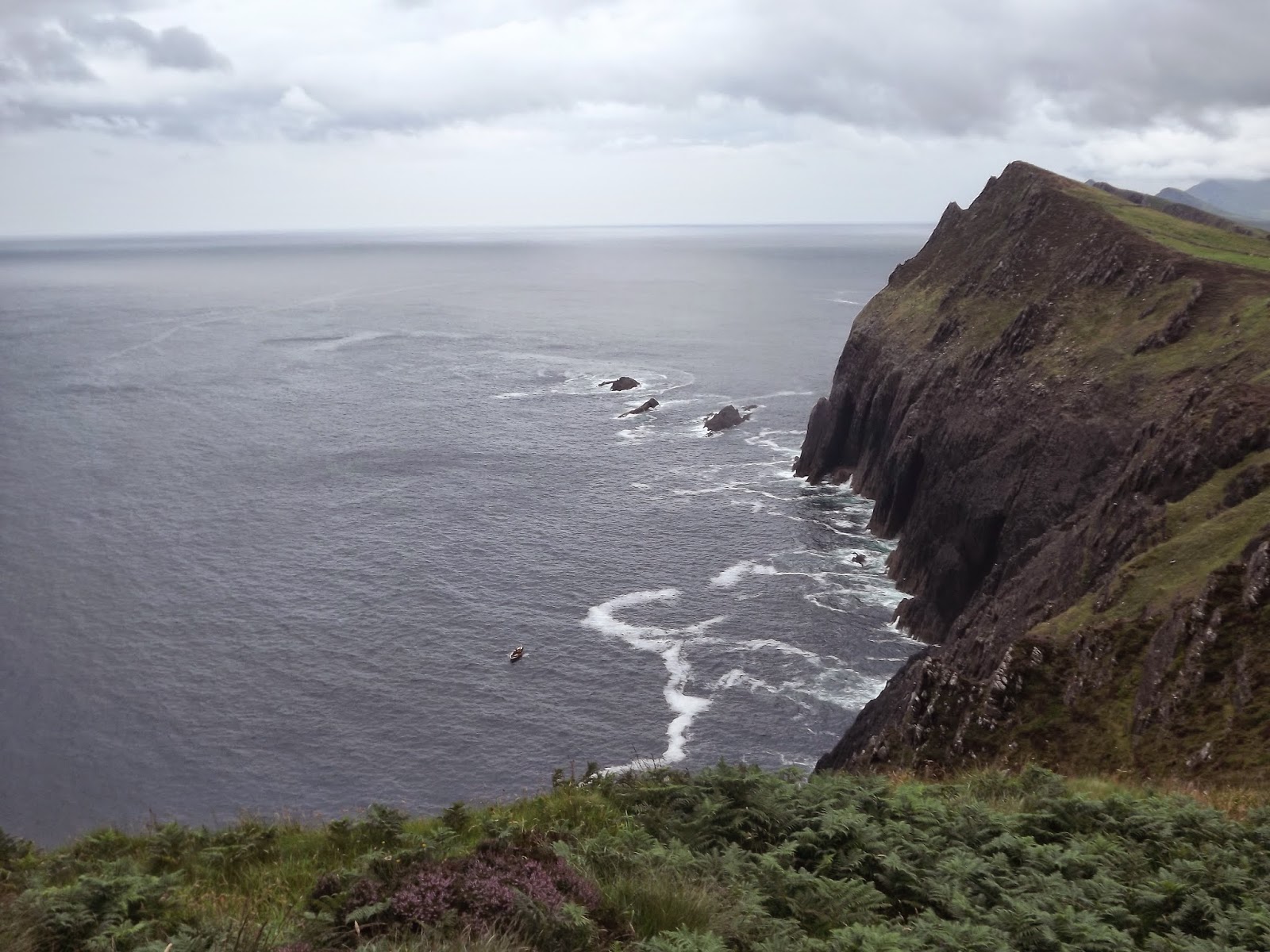 We saw this tiny boat below hauling in creels. 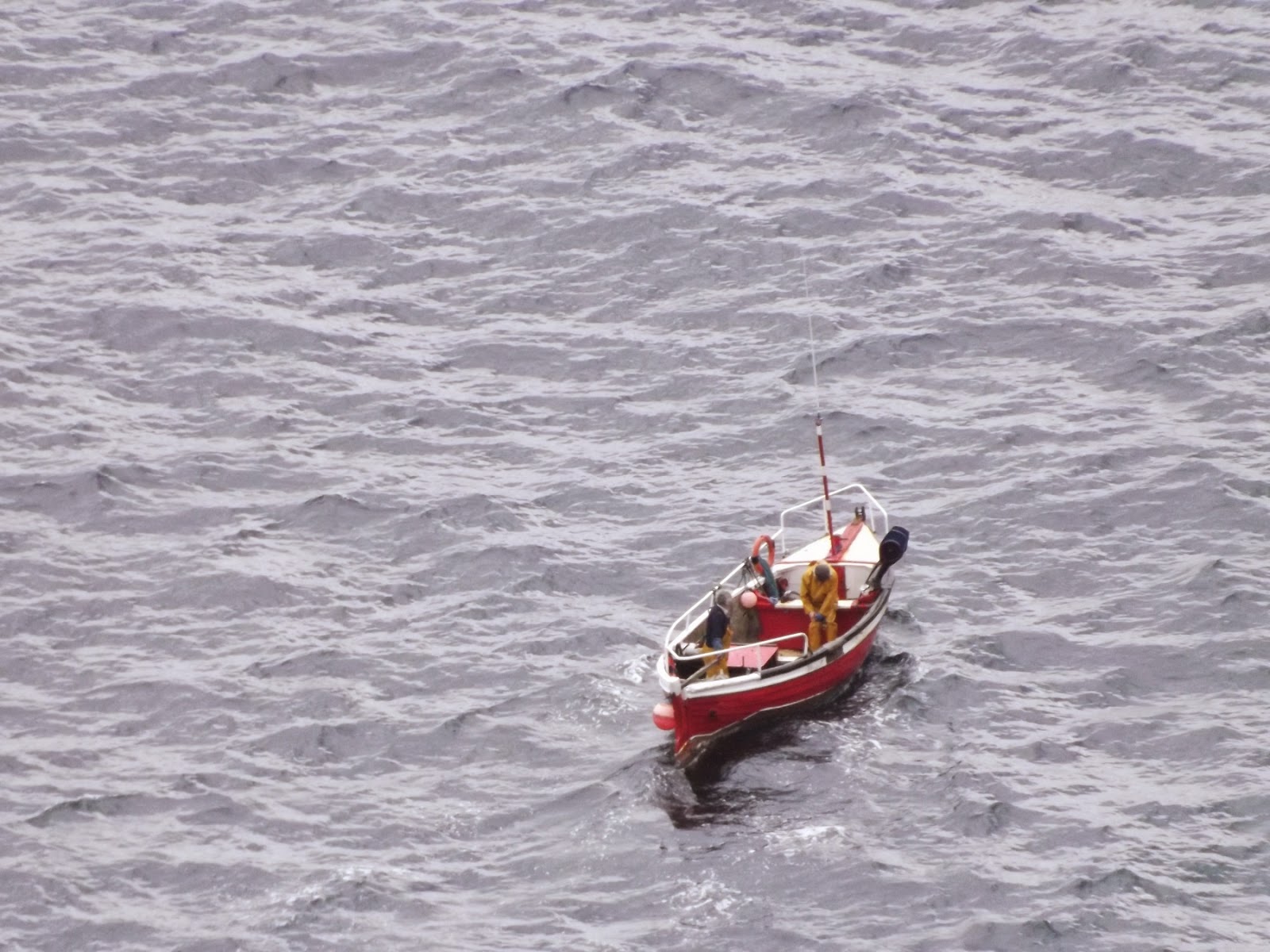 I wasn't sure I'd make it to the top of Binn Hanrai as my knees were aching but having already decided that I'd do a blog post about it, I made the effort to get a photo from the very top looking out across the wild Atlantic. 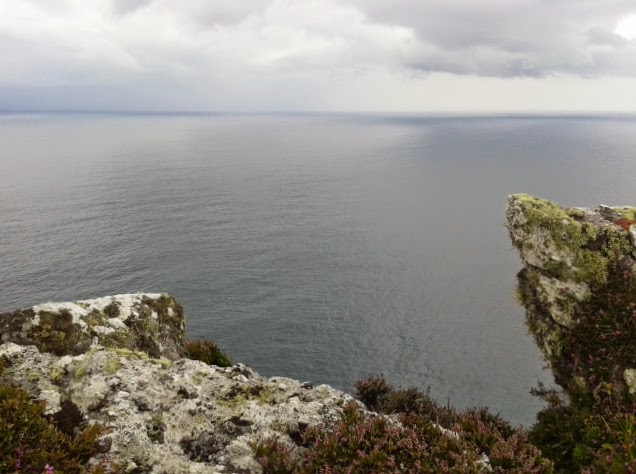 And one looking down as well! 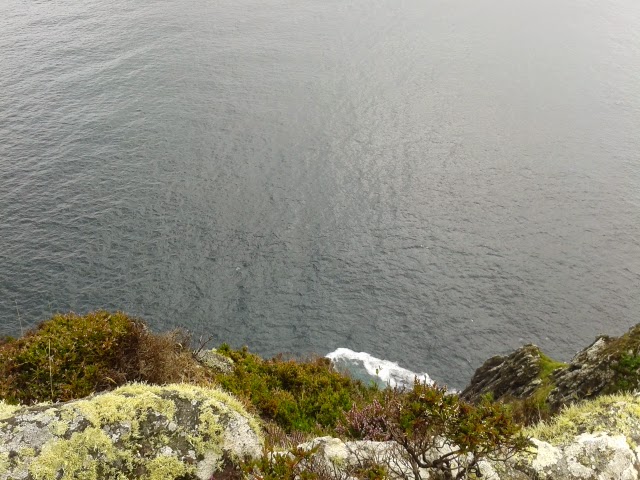 And one looking along to Sybil Head, Clogher Head and Great Blasket Island. 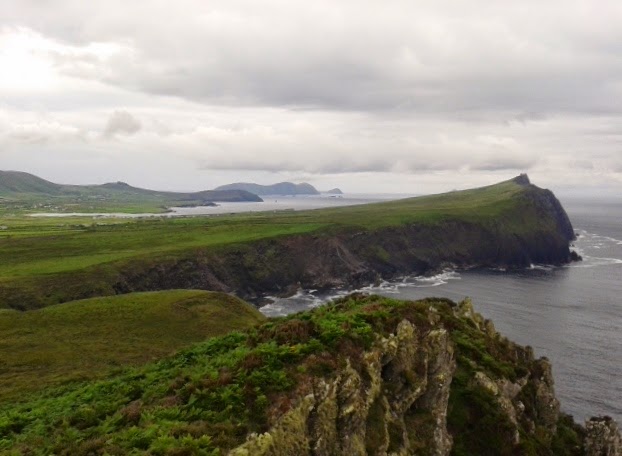 We passed more precarious drops on our way down. 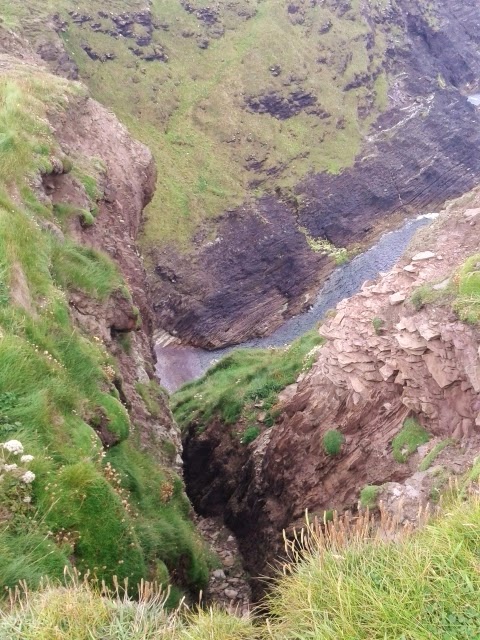 I find it fascinating to see this coastline up close. There are so many tour buses taking people around the Slea Head Drive from morning to night every day and I really feel for the people on the buses that are doing a whistle stop tour of the country and not getting a chance to really experience the wonder of the place. Everyone can take a quick photo and move on to the next beauty spot but I really enjoy getting to know a place. This area has a special 'feeling'about it that has kept us coming back year after year and never tiring of it. 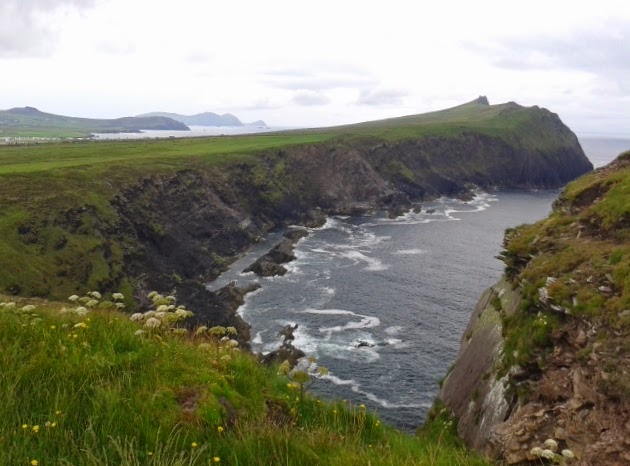 We lost the path after a while as it seemed to go on up to Sybil Head with no option of coming off the hill and as we had been up to Sybil Head before we just headed off down to where we could see a road.
I stopped to take a photo of this little bothy and the man who owned it came out to talk to us. He was a great character called Patrick who said we were lucky not to have met the wrath of the farmer who's field we'd come through when trying to find the road. We talked at length with him and he ended up giving us a lift back to our car! What a great guy! 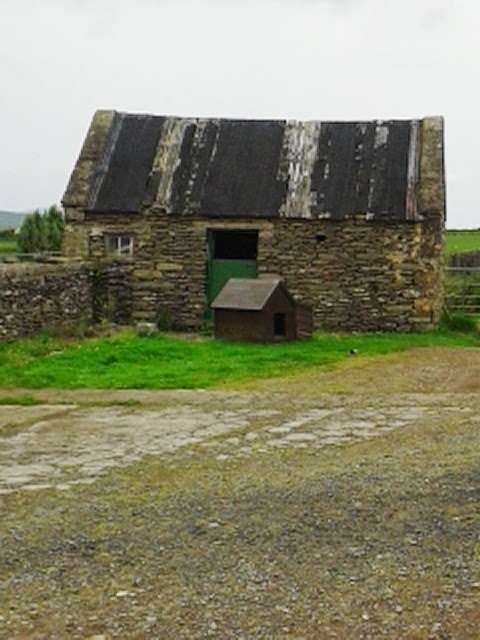 The sun came out later that day and we got our swim at Coumeenole after all. 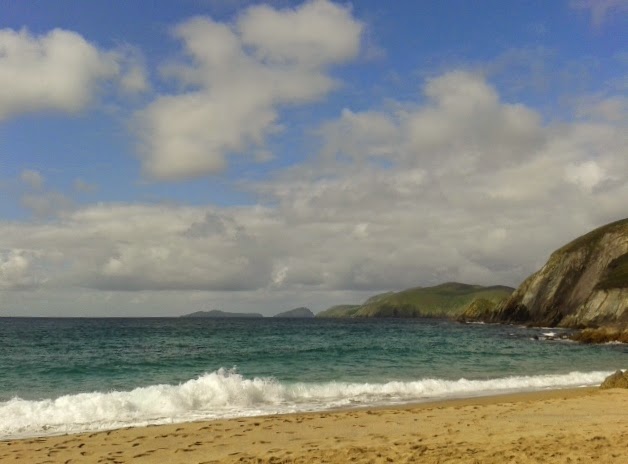 Posted by Aileen Clarke Crafts at 04:55