Wintertime Spring and a Radio Interview!

"Never cast a cloot, until the May is oot!"
Never a truer word was spoken! This old Scottish saying basically means that as Spring teases us with warmer weather, don't be putting all your Winter clothes away or stop wearing your vest and layers until the May flower, or Hawthorn is in bloom.
We were soaking up sun in the garden all last week then woke up to this on Tuesday morning! 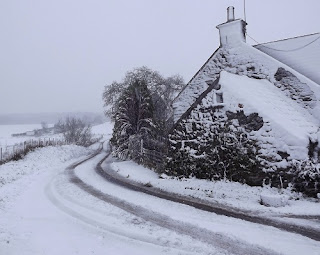 Back on with the layers of leggings, long skirts, vests and polo necks!
This is a colour photo by the way, not black and white!
Thankfully it has nearly all melted but what a shame for my children who are all excited about their new trampoline. Even now that it is dry enough to bounce on, their feet are freezing!
Thankfully the snow came after our visit to Glasgow on Sunday.
I was the guest of DJ Ciaran Dorris on his Sunday Sessions Show on Celtic Music Radio.
Ciaran has been asking me to be on his show for ages but I never felt brave enough. He offered me the slot on Sunday though and said I could plug our upcoming Open Studios event so I said yes.
I actually really enjoyed it! We had great fun as you can see from these photos my
husband took.
We were joking around, taking turns to see who looked daftest in the big earphones.
I think my son won that one! 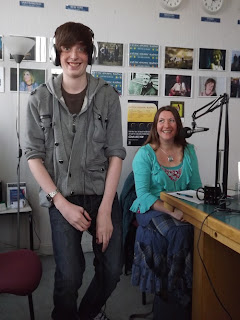 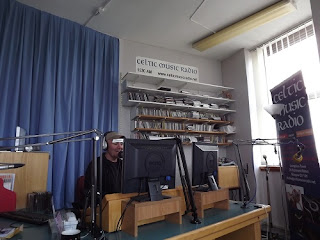 Ciaran usually interviews a musician, singer, artist or writer on his show and it goes out live online between 5 and 7pm every Sunday and he has a loyal following all over the world who join in the chat and banter via Ciaran's facebook page and email.
We heard from folks in Nashville, Texas, New York, Arkansas, Denmark, Ireland, The Netherlands and France as well as here in Scotland.
As Ciaran's guest I was 'Castaway' to a ficticious Hebridean Island for a week and had to share with the listeners what items of choice I would take with me.
A Book
A DVD
Four Music Tracks
A Luxury Item
A Guest for an evening
And something to throw in the Island Incinerator
(Something I feel the World would be better off without)
I chose
The Tenth Gift by Jane Johnson
(I like a book with a good story that also tells you something about another country and culture. This one starts off in Cornwall and ends up in Morocco)
The Blues Brothers or Hairspray (couldn't get it down to one!)
Beeswing by Alistair Ogilvy
Leave a Light on For You by Edwina Hayes
The Lock Keeper by Tommy Carew
Morning Nightcap (a tune) by Lunasa
Garlic Pepper (because I dislike bland food and assumed I'd be stuck with boiled spuds and fish for a week!)
For my guest I'd be happy with anyone who can sing and play guitar and who'd be up for singing songs all night round a fire.
And for the Incinerator I'd throw in Greed. The world be a much better place if nobody was greedy. If the multi national companies actually worked with the land and people to produce what we need rather than doing everything for profit and power. 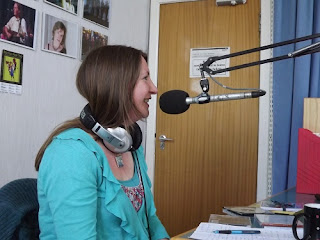 I can't believe how quickly the two hours went by! I thought I'd be lost for words but Ciaran makes a brilliant host and it was all very relaxed and enjoyable. 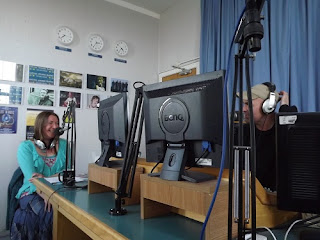 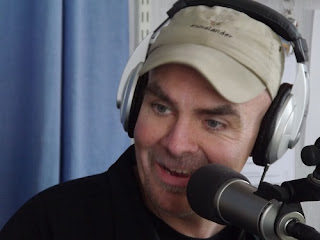 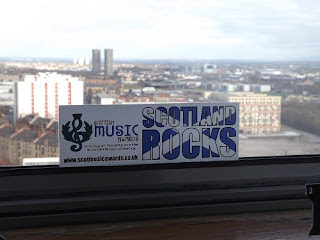 If you fancy listening in to Celtic Music Radio sometime you can find them online here
Posted by Aileen Clarke Crafts at 13:03